What's on your mind?

Hearts of Stone is very facinating, but one question remains unanswered - when does it take place?

So it's pretty clear Hearts of Stone takes place during the events of Witcher 3, but when exactly?

The answer is - around the time Final Preparations take place i.e. during the time Geralt and Ciri are in Novigrad after killing Imlerith.

So how do I know that? Well first of all that would be the time Geralt would be the appropriate level, while it's possible to reach level 27 before going to the Isle of the Mists, which would be the bare minimum, it's pretty clear we aren't suppose to do that.

We also get alternate dialogues with NPC's based on the events that take place between Isle of the Mists and Bald Mountain. Like telling Mignole how Vesemir is doing, however, it's pretty clear we should tell her he is dead as his fate is written in stone, so if we tell her he is fine it will only be for a very short time now. Other example is asking Gaunter o'Dim to find Ciri but he will refuse and tell Geralt he will find her eventually, but will offer info on how to save her from a greater threat.

However, there is another dialogue change that can happen and it's due to a quest that we can do only after Bald Mountain and that is Reason of State.

Which if we do will change the dialogue with Shani about the war, where she will acknowledge the fact Radovid is dead but that the war is not over yet.

And Reason of State takes place around the time of Final Preparations as you can only get it after finding Philippa, which indicates that, that would be the time Hearts of Stone takes place.

More over while all objectives of Final Preparations can be done in just a couple of in-game days, it's pretty clear that in real life they wouldn't do all that stuff the same day and they probably stayed in Novigrad a couple of weeks. As Geralt and Ciri both needed to rest after Bald Mountain while Philippa and Margarita needed time to recover. And even if Eredin knew Ciri is in Novigrad he would not attack the city as that would be a fight he can't win.

So that would give Geralt some free time to do a few contracts.

But there is further evidence - the List of prisoners notes that Margarita and Arthur de Vleester were captured early Birke. And Margarita notes that she came to Novigrad to escape along with Triss with her students, and Arthur de Vleester was already dead when Geralt first arrived in Novigrad. She also notes that Radovid decided to leave her for last and burn her students first which is likely why we witness Felicia Cori get burned at the stake as she was probably one of the students that came with her.

And Hearts of Stone most likely takes place in Blathe which is right after Birke as indicated by Fette de'Amin's notes which we can find during From Ofier's Distant Shores which would be around the time we rescue Margarita. As it's clear that some time has passed between the time Geralt spend in Novigrad and the events of Bald Mountain, but obviously not too much, so a month or so is most likely.

Also note that all of the Hearts of Stone quests take place in the Novigrad region.

And now that, that's out of the way it's time for something completely different.

Ah yes what is he exactly? A demon? Yes and No - he is an energumen. He is mostly like the Frankensteins monster. Notice that his body is composed of body parts stiched together, and Geralt notes how deformed the organs are yet does not imply that they are unusual in any other way.

So it was built by Olgierd from human body parts and the brought to life by having the body possessed by a demon he summoned.

But couldn't he just summon the demon without the body? No because then the Caretaker would be unable to do it's tasks like tending to the garden.

You see all demons share one common trait - they need a host in one form or another in order to interact with the world.

The Hym needs a host else it will be banished from the world, while the Draug and Draugir use pieces of discarded armours and weapons to to give themselves a physical form.

The exception are the Cat and Dog who did not possess anyone or anything but they could only exist in the world in those forms which they noted was not their original form. And they were still mostly immaterial and could only interact with the physical world to a limited degree, which would be insufficient to do the tasks of the Caretaker. Notice that they tell Geralt they are unable to bury Iris despite the fact a dog would be able to dig a grave given enough time, which means even something like that was beyond their capabilities.

Also note the Caretakers death animation, first he starts glowing all over until finally a small explosion takes place as if something left his body - namely the demon that was bound to it.

Ah yes, another thing is Geralt's eagerness to form a relationship with Shani when romancing her. But why would he do that even if he already committed to Triss or Yennefer? Because knowing him he probably committed to both.

Notice that if I'm right about the timeline then that would also be around the time It Takes Three to Tango takes place, which would explain that perfectly.

Also if there were another game in the series where we play as Geralt then there would be new romance storylines, like maybe it would be Fringilla next time. Or given CDPR tendency to foreshadowing it could be Margarita.

Also neither ending where you romance either makes sense with Blood and Wine. If Geralt romances Yennefer he retires from being a witcher, while if he romances Triss they move to Kovir yet Milton and Palmerin are looking for him in Velen. Now you can argue that those events happen after Blood and Wine but that would be 3 years later which makes no sense.

Also I doubt Geralt would reject both so it's most likely he ended up two-timing.

I've been trying to find any and all DLC info for The Witcher 2, but I have only been able to find only the pages for thw Mysterious Merchant, Herbalist's Gauntlets, and Mage's Trousers. Any and all help is appreciated. Thank you.

Hi, everyone! I'm here to let you know that Fandom is currently celebrating Pride Month!

Throughout the month of June, we have been taking the time to celebrate the Pride community and their representation across media. We have had similar celebration events in the past, but in case this is your first time hearing of this, what we do at Fandom is highlight a number of TV shows, movies, video games, comics, artists, and some of the characters featured in these. We also hold community roundtables on Discord to discuss these characters! You can read the blog post introducing the event to find out more!

From The Witcher, we're featuring the character Ciri!

Next week, we are hosting a roundtable session on Pride in video games, which is an opportunity to share your thoughts on Ciri and other video game characters that represent Pride!

Participating in the roundtable is really simple: click here to join Fandom's Discord server and sign up for the event! The video game roundtable is happening on Wednesday, June 15 at 12 PM Eastern. By clicking that link, you'll get a Discord notification when the event begins, at which point you can start chatting as much or as little as you want in the linked channel!

What am I talking about? Well it's about "Open Sesame: Breaking and Entering", when recruiting Eveline Gallo she offers to join the team if Geralt performs instead of Vann who went blind due to drinking alcohol from a bad source.

So how is it that he went blind by drinking some booze? Well I know the answer.

You see "alcohol" is actually a hypernym and there aremany types of alcohol, for example glycerin is an alcohol too.

Traditionally when we talk about alcohol we talk about ethanol - that's the one that gives you the buzz. However, there is also an alcohol called methanol - the simplest alcohol. Methanol pretty much looks, smells and tastes just like ethanol, however, unlike ethanol it's deadly poison. You take one shot of the stuff and you will end up 6 feet under, and even if you survive it will cause permanent blindness as it will destroy your optic nerves.

So yes going blind due to alcohol from a bad source is not far-fetched at all. Vann simply took a shot of methanol and went permanently blind.

Guys im playing The witcher 3 for the first time so i dont know a lot about the end and stuff. I wanted to finished it without help of anybody. So i was not expecting that having love with both was wrong. Now im worry if this mision means i will finish alone. Isnt any way i could fix it? 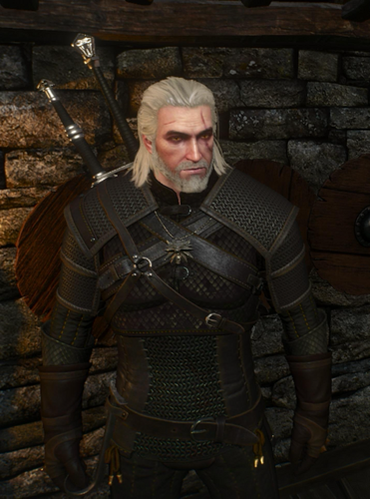 Its reportedly being called The Witcher: Sirens of the Deep. It might be about Eskel, Lambert, and Coen following the events of Nightmare of the Wolf. Also Sirens means we'll see Skellige in all its glory!