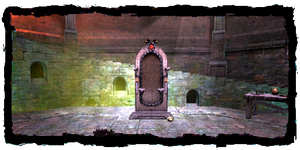 In the darkest corner of the catacombes sous le vieux château, Azar Javed has set up his laboratoire. It is from there that he directs his Salamandre operation, using the télécommunicateur that is also within and conducts his nefarious experiments. It is not the easiest place to access, being guarded by mutants, chiens mutants, mutants assassin, chiens de l'Ordre, grands frères and a koshchey.

After battling his way through this gauntlet, Geralt finally faces down the mad mage and ends his reign of terror once and for all. It's over ... but is it? Who's that in the miroire? It appears that Javed was taking orders from even higher up, the Grand Maître of the Ordre de la Rose-Ardente, Jacques d'Aldersberg himself.