The first time Geralt meets Siegfried, it is in the Vizima csatorna which the knight himself had locked a few days earlier in order to keep a dangerous kukorix from getting out and terrorizing the city. As a knight of the Order of the Flaming Rose, Siegfried is also bound by their tradition and technically a monk. He has taken a vow of celibacy.

When the two first meet, Geralt can either choose to accept the knight's offer of help in killing the cockatrice, or go it alone. Either way, after the cockatrice has been dispatched and both Geralt and Siegfried are making their way to the exit, they are set upon by some Szalamandra. Siegfried makes a sarcastic remark asking Geralt if the Salamandra were friends of his, but then on a more sober note mentions that he knows a private detective who might be of service, Raymond Maarloeve, citing him as a friend.

For the remainder of Acts II and III, Siegfried spends most of his time at his post. In Act II, that post depends on the events in the sewers with the cockatrice. If the two fought as a team, Siegfried is just outside the állomáshelye near the kolostora of A Lángoló Rózsa Rendje. If Geralt fought the beast alone, then the knight is stationed outside the front entrance to the kórház. In either case, though, he does make a brief excursion to the mocsár. In Act III he moves to the entrance to the kolostora proper. 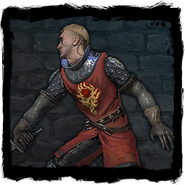