In the novella "Az utolsó kívánság", Geralt reminisces about an afternoon with Eskel when they were young.

If you stick around Kaer Morhen after you have cured Triss with the potion, you can receive a fistfighting tutorial from Eskel as well as some valable information on fighting in general. Otherwise, his role in A Witcher is quite small. He appears in no other acts, only the Prológus (as is the case with all other witchers in the game except Berengar).

Eskel does feature prominently in the premium module "A Semlegesség Ára", where he is nearly as important as Geralt to the plot. In "A Semlegesség Ára", he must come to terms with the consequences of a chance encounter some 20 years in the past. It appears that Eskel saved a knight in dire trouble and was offered anything he wanted as a reward. Given such a wide-open choice, he could not think of anything and instead repeated the fabled and oft-heard request "give me that which you find at home yet don't expect" that he had heard Vesemir repeat over the years.

Eskel can be found in the Öreg Bánya, just south of Kaer Morhen where he is busy clearing the place of a kikimór hatchery and generally brooding about Deidre. 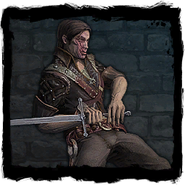 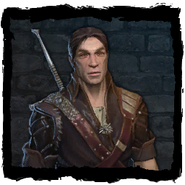