Szerkesztés
watch 01:36
We're Getting Mutants in the MCU - The Loop
Do you like this video?
Play Sound

Shani is a red-haired medic, and a student at the Academy of Oxenfurt. While still a student, she, Dandelion and Philippa Eilhart helped Geralt chase down Rience. She participated in the Battle of Brenna as part of the staff of Milo "Rusty" Vanderbeck's field hospital. A friend of Dandelion and Geralt. Many years after the Witcher Saga, she became the Dean of the Faculty of Medicine and Herbology of the University of Oxenfurt.

A The Witcher számítógépes játékban, Geralt meets Shani in the Vizimai Külváros, trying to get into the city and Lebioda Kórház to help treat the Catriona-victims. She's surprised to see him, because, as she tells him, "I heard you died." While in the Outskirts, Shani stays at the Fogadó, healing Geralt whenever he enters and she looks after Alvin until Abigail takes him under her wing.

Once in Vizima, Shani can be found in Lebioda Kórház during the day (roughly from 9:00 to 18:30), in the streets or at home during the evening, night and early morning. If Geralt visits her at the hospital, Shani will heal him. She does not need to be asked, this is automatic. In fact, I believe that Shani heals Geralt whenever he is down in vitality, wherever they may be.

She lives near the statue of the aesculapian snake off the merchant's area in the Vizimai Templomnegyed. Her apartment upstairs can be difficult to get to because of Grandma who stands vigil downstairs. It seems that Grandma has lived a full life, but now, in retirement she prefers to play sentry.

To get past Grandma, Geralt can use sweet talk, gifts (alcohol or a pair of gold gloves), some orens or a ring. Sometimes this will gain him entry only that one time, other times permanent entry is gained.

Egy régi jó barát, a quest, takes place almost completely in Shani otthona. Over the course of the evening, we learn that years ago, Dandelion interrupted something between Shani and Geralt. After the party ends, and Geralt's thank-you or apology, Shani reveals just what it was that the bard had so rudely interrupted.

The medic is also an invaluable resource during the witcher's investigation in Vizima. As the only medical professional, she is the only one who can conduct an autopsy. Luckily for Geralt, she's a friend.

In Act III, Geralt is forced to choose a guardian for Alvin, his only options being Shani and Triss Merigold. If he chooses Shani, he gets a second chance to know her better. If not, he neither sees nor hears from her again until Act V, where she relocates to create a field hospital of her own, treating plague victims and the casualties of the battle regardless of race or affiliation.

Shani in her nightie 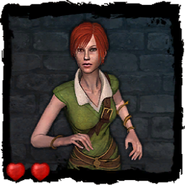