Zoltan Chivay is a törpe, veteran of the Second Nilfgaard War, and a friend of Geralt. They first met when Geralt and his party were going towards the Yaruga river from Brokilon, but the dwarf advised them to join his company and go eastwards. It is from Zoltan that Geralt got his sword - Sihil.

Other members of Zoltan's company were:

He also had a talking parrot, Field Marshal Duda, which he sold to the gnóm Percival Schuttenbach when he started a jeweler's workshop in Novigrad.

After the Battle of Brenna, Zoltan got engaged to Eudora Breckenriggs.

Geralt first meets Zoltan in the Vizimai Külváros, surrounded by racist thugs. After giving them a sound beating, the dwarf is surprised and very happy to see Geralt, whom he claims to have witnessed dying five years earlier with his very own eyes.

During the ensuing chat, the dwarf also mentions that his in-laws-to-be, the Breckenriggs (this name is spelled in a few different and interesting ways throughout the game: Breckering, Breckenridge ...), value material possessions more than Zoltan does. Lucky thing, since he has far fewer after the Common Cause Mine failed.

Zoltan is the one to acquaint Geralt with kocka póker, and to give him a couple of pointers about whom to challenge. After the initial meeting, he can be found in the Fogadó for the remainder of Act I, except the very end when Geralt has to rescue Shani..

Later in the game, Zoltan can be found wandering around the Templom Negyed (roughly from 8:00 a.m. to 8:00 p.m.) and, if choosing to side with the Scoia'tael or take the neutral path, in the Ó-Vizima. He also often spends time with Golan Vivaldi. 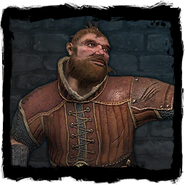