Éibhear Hattori was an elven master swordsmith living in a house in the Glory Lane district of Novigrad around 1272.

He sells a variety of crafting components, runestones, and diagrams once Of Swords and Dumplings is complete.

Hattori made a decent living making master swords, and his name came to be known far and wide. However, when a fellow swordsmith, Ernst van Hoorn, started their own business, van Hoorn realized they lacked real skill to compete with the others in the area and so began to find other ways to monopolize on the swordsmithing trade, pushing anyone out of business or making false accusations, like accusing Hattori of working with havekars.

Hattori tried to fight back and took the matter to town hall, but with van Hoorn backed by a local gang leader, Cleaver, Hattori's appeal was denied. Faced with either being killed or dropping out of the swordsmithing business, Hattori turned to making dumplings instead, converting the outside of his home into a small restaurant.

If Geralt helps him get back into swordsmithing: One day Hattori was greeted by a witcher, Geralt, and decided he missed the forge too much and to try and get supplies through another gang leader, the King of Beggars. However, it soon led to him having to get a temporary bodyguard in the form of Sukrus, as undoubtedly Cleaver would try to do away with the one trying to break up the swordsmithing monopoly. However, even with all the troubles that arose, Hattori was finally successful and able to return to working with a forge in peace. 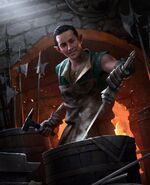 Gwent card art
Add a photo to this gallery
Retrieved from "https://witcher.fandom.com/wiki/Éibhear_Hattori?oldid=514823"
Community content is available under CC-BY-SA unless otherwise noted.