q2127_w_haunted
A Ghost Story is an optional quest in Chapter II or III which Geralt can undertake if he happens to meet a certain thug in a certain house in the slums. The quest does lead to a Romance card, but otherwise has no impact on the narrative.

A morning stroll into the wrong neighbourhood quickly climaxes into something more. When Geralt enters the door across from the warehouse in the Temple Quarter's slums during the day, after 6:00 am, and has a look around, he is likely to find a thug.

This thug will either already be there, sweeping, or enter after Geralt, if he arrives before 6:00 am. He will demand to know what the witcher is doing there, to which our hero will give one of his quick and less than informative retorts.

The thug will then offer the witcher a quest. Apparently, there is a haunted house not far away with some treasure going spare because of the specters. If Geralt meets him there and helps dispatch the ghosts, they can split the treasure. The thug marks the place on the map and leaves. Geralt follows him, but he is too quick and has already vanished from sight, so our hero must rely on his trusty map to find the dwelling.

Once there, he enters only to be ambushed by the same thug who sent him there and some backup in the form of three more ne'er-do-wells. It seems they have been holding a half-elf woman captive while waiting for the witcher. A skirmish breaks out, the usual course of action follows and Geralt checks that the damsel is no longer in distress.

She does not speak the language very well, but manages to communicate her thanks and that she will give the witcher a reward if he goes to see her later, in the non-human district. She says that she is staying at the dwarven blacksmith's house. This is not the living quarters above the Dwarven blacksmith shop, but the house facing Kalkstein's and Golan Vivaldi's places. It is separated from them by a low wall and so must be accessed from the alley off Peddler street next to the hospital. 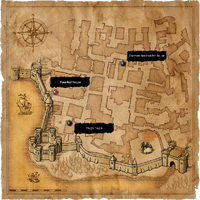 Not being one to pass up a reward, Geralt finds the half-elf a while later, at the blacksmith's house and gets in a little practice speaking some Old Speech. If his memory serves him correctly, a roll in the sack ensues. 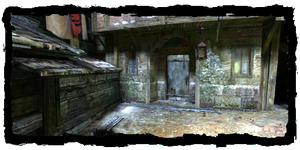