A Hog Named Henselt is a book and quest item in The Witcher 2: Assassins of Kings.

This pamphlet, authored by Dandelion, can be looted from the body of Vinson Traut during the quests Conspiracy Theory and Courage Symbolized.

Boxed editions of The Witcher 2: Assassins of Kings also contain a physical representation of the pamphlet, and it is included as a PDF file with digital editions of the game.

... Yet Henselt courts the Imperial envoy like a cheap whore who has singled out a burgher with a full pouch at the brothel. Keep in mind that a whore can let anyone she wishes plough her. Her arse – her choice. The King owes us more. His arse belongs to all of us and its name is Kaedwen. Dare we allow a Nilfgaardian prick to plough our country? As my friend who is a witcher says, "If that's what the world needs to be saved, perhaps it would be better that it perish." 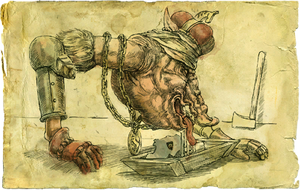 A Hog Named Henselt
King Henselt is like a hog in countless ways. Firstly, his appetite is unlimited: just as a hog sinks its teeth into all things edible, lecherously licking its chops, so Henselt bites at his neighbors. Swine pay no mind to the freshness of their fodder, pouncing upon carrion with reckless abandon. And Henselt ventures into Aedirn – a realm orphaned of its ruler and gravely weakened like a dying man. A hog's eyes remain fixed on the ground beneath its trotters, and Henselt is likewise short-sighted, failing to foresee the consequences of his deeds. Driven by his hog-like desire to stuff himself, he now leads his army and realm to destruction. It is no wonder, then, that some have appeared who seek to slay the crowned swine of the North one by one.
A new order must arise in the Northern Kingdoms. A wave of turmoil has passed through Aedirn and Temeria, and now it rushes towards Kaedwen.
A swell murky with blood rises in its wake.
Once it reaches Henselt's realm, we shall not speak of regicide, but of the simple slaughter of a pig.

Retrieved from "https://witcher.fandom.com/wiki/A_Hog_Named_Henselt?oldid=509183"
Community content is available under CC-BY-SA unless otherwise noted.