A Lost Lamb is a quest given to Geralt by Vaska in Chapter II, during his first visit to the Brickmakers' village in the swamp.

As our hero makes his way in and around Vizima, he ultimately ends up trudging through the swamp forest. In the forest there is a village of brickmakers, led by their eldress, Vaska. The witcher is initially looking for information on Berengar and the mysterious Mage's tower, but in the course of his investigation, he finds that the brickmakers have lost one of their own, a young boy.

Vaska believes the child has been kidnapped by druids to be transformed into a dryad, so Geralt's first stop is the Druids' grove to speak with them and get their impression of the situation. The druids laugh off the idea of kidnapping children. They only accept adults into their ranks. They certainly did not kidnap the boy, and turn him into a dryad? Honestly!

Luckily there is a dryad, Morenn, staying with the druids in the grove. The witcher can ask the dryad directly about transforming boys. Morenn also laughs off this suggestion, pointing out that only girls can be dryads. At this point, the conversation turns to where little dryads come from.

Morenn explains that dryads, having no men among them, take in men from other races to further their species. They take only the most agile and strong, hoping the young girls will inherit their fathers' physical attributes. Such a man would have to prove himself as a hunter, by bringing her a wolf pelt.

If brought a wolf pelt, the dryad intimates that she is fully aware that witchers are sterile and since no procreation could come of their union, there is no point. Geralt is not so easily dissuaded and points out that sex without procreation can be good. She counters that good just is not enough. He then suggests that sex relieves stress, which is good for the mind and body. She sees the logic in his argument and relents. They have sex.

But that does not find the lost boy, in fact, nothing does in Chapter II. It is not until Chapter III and the Reaping Time quest that our hero finally locates the missing child.

Vaska claims the druids kidnapped a boy to turn him into a dryad. She asked me to find him. Perhaps I will go to the druids' grove and ask around about the boy. I must ask the druids about the missing boy.

I told Vaska that the boy's disappearance had nothing to do with the druids and I promised to bring him home if I find him. I promised that I would take the boy home when I find him. (500 XP)

Vaska is grateful for finding the child. (2000 XP) 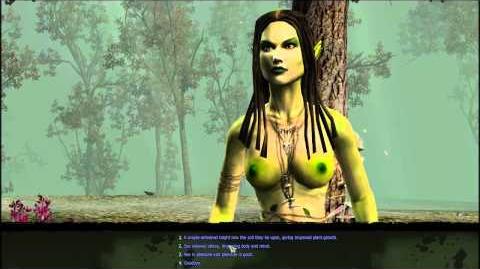 The Witcher A Lost Lamb and Dryad Sex Card (Hard) HD
Retrieved from "https://witcher.fandom.com/wiki/A_Lost_Lamb?oldid=507202"
Community content is available under CC-BY-SA unless otherwise noted.