A Night to Remember

View source
watch 02:46
The Quarry - The Loop
Do you like this video?
Play Sound

"A Night to Remember" is a pre-launch trailer for The Witcher 3: Wild Hunt released by Digic Pictures and CD PROJEKT RED on 14 May 2015. Similar to the Killing Monsters trailer, this cinematic told a short, yet engrossing story about Geralt hunting a bruxa.

Our protagonist, the fearless witcher, Geralt of Rivia, meets a woman that is not revealed by name on the bank of a river, who is singing a haunting lullaby. When Geralt approaches and notes that the locals paid him for her, she remarks that in the times past witchers would never take such a contract. Then she throws off her clothes, transforming into something invisible and quickly disappears into the nearby barn. Geralt, after taking some preparations and drinking a potion, follows.

A scramble begins where the woman is revealed to be a type of higher vampire. During the fight, she manages to bite Geralt, but the potion which happens to be Black Blood affects her, slowing her down and causing extreme pain. Geralt seriously wounds her and she flees from the barn, falling right outside thrashing about and pitifully attempts to crawl away. Geralt, in pain, follows behind her, preparing his hook his trophy, but collapses alongside her, seeing her revert to her human form.

When the White Wolf awakens, he sees the bruxa's body lying facedown next to him, burned from the morning sun. He leaves the rest of her melting body without taking the trophy and rides on his faithful Roach towards the capital city of Toussaint, Beauclair.[1]

Lyrics are original and together with the music arrangement were composed by Marcin Przybyłowicz. Vocal is performed by Laura Doddington. The lullaby and trailer partially use the music from A Hole in the Sun by Two Steps From Hell

Wolves asleep amidst the trees,
Bats all a swaying in the breeze,
But one soul lies anxious wide awake,
Fearing all manner of ghouls, hags and wraiths.
Birds are silent for the night,
Cows turned in as daylight dies,
But one soul lies anxious wide awake.
For the witcher, brave and bold,
Paid in coin of gold.
He'll chop and slice you,
Cut and dice you.
Eat you up whole.
Eat you whole.

On 26 August 2015, the full version of the lullaby was released on the official YouTube channel "The Witcher" under the name "Lullaby of Woe".

One of the main goals of this project was to convey the harsh 'reality' that killing monsters is actually hard work because as it should be known it is difficult, grueling, and mostly unpalatable - there's nothing 'beautiful' or glorious in it. Audio was an early element in the animatic to fine tune the mood needed. "In this particular case," says Zorkóczy, "It worked so well that the track we originally used as temp music made it all the way into the final version - A Hole in the Sun by Two Steps From Hell. The final audio mix was provided by CD PROJEKT RED who did a wonderful job, and really nailed the right tone for the film." Also, the design of Geralt, the main protagonist is based on course on promotional materials for third game "They would identify key features like his build, his hairstyle, or his cat-like eyes resulting from the magical mutations of his training," says lead character modeler Tamás Varga.[2]

The teaser for this trailer released earlier has a hidden message from developers during 00:22 seconds:

After 3 long years The Witcher: Wild Hunt is finally ready to go. The reviews are already out and the reception is amazing. We can't wait to hand our baby over to you. It is a very important milestone for all of us here. We went from 50 people in the first Witcher to over 200 creating a massive world of Wild Hunt.

It's a grand scale now, but the nuance and soul of the series is intact. We won't have it any other way. This is one for the fans who supported us all this time Those who cheered for a different kind of fantasy. One that's dark unsettling and personal. Here's something to sweeten these last days of waiting. Here's "A Night to Remember," a short, spoiler free cinematic. 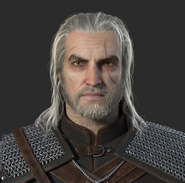 Geralt model used in the trailer 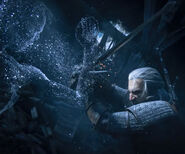 The bruxa in the trailer