A Posh Reception is a quest which is given to Geralt by Triss at the beginning of Chapter III. The merchant Declan Leuvaarden is holding a reception at The New Narakort at 18:00 and the witcher is invited. Triss insists that he go and so begins the quest.

Geralt wakes up in Triss Merigold's bed, at her home in the Trade Quarter. The last thing he can remember is having fought Azar Javed in the Swamp. She explains that she found him unconscious in the swamp and brought him back to her place to recover. After she has "checked him for internal injuries" (an unofficial sexcapade with no card) and discussed his amnesia, she suddenly remembers that they have been invited to a social function that evening at 18:00 at The New Narakort.

That evening, the witcher presents himself at the banquet which is being held in the facilities on the second story of the inn. There he is met by the sorceress. She tells him not to look so morose and ushers him into the main area where they are greeted by Leuvaarden. She introduces the witcher to Velerad the burgomeister, Thaler (well, re-introduces him) the chief of security, along with Erkin von Blunt, Count de Wett, and Princess Adda. She then leaves our hero to mingle.

Geralt speaks with everyone again and finds out some interesting information about himself as well as the other party guests. When he speaks with Adda, she conveniently and firmly dismisses de Wett, sending him to fetch wine from as far away as possible. The princess and our hero then converse. He is complimentary at every opportunity and soon she mentions that she would like her current whim fulfilled, but she will not say what it is except that it is food. Geralt must then question Velerad and Thaler again to find out her favorite meal and how to prepare it. (If you inadvertently insult her, do not panic, she will eventually speak with you again. Just keep trying.)

Thaler will not speak until Geralt runs an errand for him. He needs a letter which is in a large trunk in the room next door. The witcher heads over and retrieves the letter, but is surprised in the act by a rich merchant. The merchant seems amenable to some alcohol, so perhaps the right tincture would suffice (it does not really matter, this meeting is inconsequential). Then it is back to Thaler with the mysterious note. At that point, the head of security reveals that the princess is particularly partial to catoblepas meat.

Velerad will not speak without some stronger alcohol, vodka seems to be his preference, but any strong alcohol will do. Once the burgomeister is sufficiently liquored up, he tells Geralt that Adda likes her meat raw; a little remnant of her days spent as a striga.

The witcher then asks Triss to conjure a portion of catoblepas meat, rare, which he then presents to the princess. She is pleased and invites him to "discuss politics" in private in her alcove next door. The two meet and as expected have a little roll in the hay. (Geralt can resist a little, i.e. once but not twice, if sex is his goal, but refusing does provide some information that he does not really receive otherwise: the fact that her father, the King, wants her to stay out of politics, and that she is planning "something" to prove him wrong but what she is planning she will not say, and this tidbit proves irrelevant since it does not add any information to the Glossary).

Immediately after their little tryst, Triss barges in and tells Geralt that he must go speak with Leuvaarden again regarding a proposition. Apparently she does not notice what has just happened between the princess and the witcher. So it is back to the main banquet hall to speak with Leuvaarden who outlines the details of his plan triggering two new quests: Following the Thread and Lock and Key.

Before leaving, Geralt can go back and have a "chat" with Erkin von Blunt. Five sodden meads later, he is the proud owner of the House of the Night signet ring, and von Blunt's cover is completely blown. Oh well...

I ran into Triss at Leuvaarden's reception. I can't wiggle out of this now. Triss asked me to lighten up and mingle, meet some of the other guests. I'll look around, maybe meet someone interesting.

The Tastes of a Princess Edit

What could the Princess of Temeria, formerly a striga, possibly like? Maybe the burgomeister knows something... I should talk to Velerad about Adda's tastes. (500 XP)

The burgomeister seems a bit nervous. Maybe he needs to relax before he'll talk to me... A shot of vodka should do the trick. Velerad could use a shot of vodka.

Velerad said Thaler is furious about what is requested of his men. Maybe I should talk to him... I should speak with Thaler. 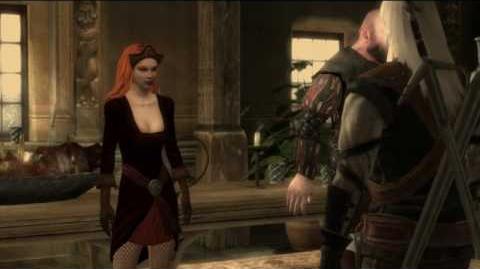 A Posh Reception and Princess Adda
Retrieved from "https://witcher.fandom.com/wiki/A_Posh_Reception?oldid=500792"
Community content is available under CC-BY-SA unless otherwise noted.