A Rough Landing is a quest from Chapter 1 in 'The Witcher 2: Assassins of Kings; the chapter opens with both it and A Sword for Monsters.

After landing in the forests west of Flotsam, Triss, Roche, and Geralt encounter Iorveth on their way to the town. Regardless of the witcher's dialogue options, you will be ambushed by a band of Scoia'tael. After casting a spell to ward off the arrows, Triss collapses; Roche then carries her while Geralt fights off elves who close for melee from ahead and behind.

As the trio reaches the docks, the presence of guards deters further pursuit from the Scoia'tael. Geralt looks back and spots the kingslayer (who we hear chat briefly with Iorveth) as the archers disappear back into the forest.

As this quest ends, Assassins of Kings advances and By the Gods - Stringing Up Sods begins.

Vernon Roche's ship finally reached the vicinity of Flotsam, a trading post governed by commander Loredo. Roche wanted to meet his informant, yet, unsure of the commander's loyalties, chose not to dock in the harbor, but rather to land on a beach and conduct a bit of reconnaissance before bringing the ship in. He took to scouting in the company of Geralt and Triss.
It is prudent to inform the reader that, on account of his profession and personality traits, Vernon Roche had many enemies and possibly no friends at all. By 'many enemies', I mean a legion, and not a weak one at that. In Flotsam alone, Roche counted commander Loredo and the local elven unit's leader, Iorveth, among his foes. The latter crossed our heroes' path. And when a hunter of Squirrels meets the guerrillas' best known leader, the pleasantries can only last so long. The elven partisans immediately attacked from hiding, and Geralt's company only avoided becoming arrow-riddled hedgehogs thanks to Triss Merigold's presence of mind. Vernon Roche took the sorceress, exhausted by her protective spell, into his arms, and Geralt covered the company with his sword. Leaving a trail of corpses behind, our heroes pushed towards Flotsam.
At the town gates, our heroes were greeted by Temerian soldiers. Only then did the Scoia'tael withdraw, and the witcher managed but a glimpse of the faces of Iorveth and the kingslayer who accompanied him. Unable to confront their foe, the company proceeded to the town in search of Roche's informant. 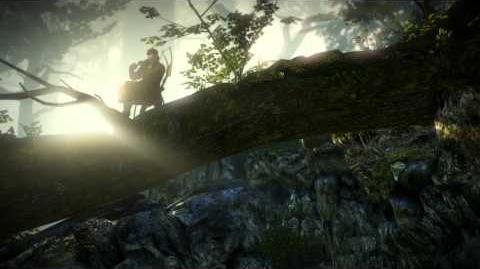 Retrieved from "https://witcher.fandom.com/wiki/A_Rough_Landing?oldid=509200"
Community content is available under CC-BY-SA unless otherwise noted.