A Sackful of Fluff

A Sackful of Fluff

On Roche's path, this quest can only be started before leaving the Vergen side of the mist and returning to the Kaedweni camp during the quest The Blood Curse. It may also be more convenient to collect 80 harpy feathers near the visionary's hut, before crossing the mist for the first time, than later at the old quarry.

Go to the old quarry in Chapter II (southwest of Vergen, out past where the troll spawned for Iorveth's path) and speak to a man named Elthon in the hut near the entrance above the quarry. This hut was previously empty.

First he'll ask for 12 harpy feathers for a mysterious collector - if you agree to this quest, you'll want to run down to the first bend in the quarry area, kill some harpies or erynias, loot them and bring the feathers back. Note that each monster typically drops one or two feathers.

After you give Elthon the 12 feathers (he'll pay you 3 orens each for these first 12), you can choose to delay the quest or agree to get 60 more for him. You can also try to increase the price per feather, asking for "a lot" more (1.5 times the original price, a total of 180 orens) or "a whole lot" more (which will be twice the original price, a total of 360 orens). Either of those choices will require a successful 'persuasion' check, however simply agreeing to his request without asking for more money results in an even larger payment of 400 orens. (This has been patched he only gives you 100 orens for 12 feathers no matter which option you choose.)

Either way, getting 60 more harpy feathers doesn't take too long if you walk away from the hut and meditate for a while, say a day or two. Then you just run the quarry down and defeat the Harpys. Once you are at the bottom find a nice spot to meditate again, usually 24 hours is enough. Remember you'll get the best results around midnight. Afterwards run the way back up and meditate some steps away from the hut. Do that several times and you have enough feathers in no time. Make sure to use Quen and spam some Dancing Star or Grapeshot bombs. If things get too hairy you can run to either the dwarfen doors or the hut - the harpies won't come in there after you.

Another way to get these feathers easily is during the quest "Hunting Magic". At the Place of Power, this ruined tower near the dwarfen crypt, a lot of Harpys will spawn so be careful. Climb up and fight your way through ,afterwards you can easily jump down again find a place to meditate and do this all over again. Repeat this a few times and you have the 68 feathers. (Tipp: After this quest you can take another where he needs 8 more feathers so you can easily collect them now as well.)

Return to the hut at the top of the quarry and get your reward for 60 feathers, then agree to get 8 more (or refuse and fail the quest). You may already have enough feathers on hand, or you may need to hunt some more harpies. Either way, talk to him again once ready and give him the 3rd batch of feathers in return for 100 more orens.

After this you'll need to "come back later"... so just walk a short distance away, then go back into the hut for a pleasant surprise. You'll have several awkward conversation choices, which don't seem to affect anything, but after you leave you should check your inventory for a fun new trophy.

Although Elthon's trophy isn't very powerful, it makes for some great silly screenshot material since Geralt wears the trophy (once equipped in the trophy slot) on his face. Keep in mind at the price of feathers this quest is only really worth the humorous trophy and conclusion. By selling the feathers at any store you can net from 184 to 404 more orens depending on your chat choices during the quest.

I suppose you must be wondering if, while keenly pursuing the kingslayers, Geralt took on any errands of the kind he was wont to complete. I have in mind such pursuits as the extermination of monster colonies and the collection of rewards for impressive trophies cut from the corpses of slain beasts. I delved deep into my memory in search of something that might answer this question and, lo and behold, recalled an adventure in this very vein. Our hero was retained by an individual named Elthon, who lived in a hut by the quarry near Vergen. Elthon was willing to pay good coin for harpy feathers, which he was purportedly amassing for a certain collector. In exchange for a pouch full of orens, Geralt was to bring Elthon twelve impressive plumes.
If Geralt doesn't agree to collect sixty more harpy feathers:

Elthon wished to retain our hero's services again, this time to collect a larger number harpy feathers. Uncertain of the commissioning agent and unexcited about the task itself, Geralt debated whether to accept the potentially tedious duty of collecting fluff.

The mysterious collector's appetite for harpy feathers seemed insatiable. Elthon made the witcher another offer – a generous sum in exchange for nothing short of a copious pile of plumes. Though he accepted, Geralt wondered if it was all worth it. Sixty feathers was a tall order, even for a witcher.
If Geralt doesn't agree to collect eight more harpy feathers (the quest fails):

Ultimately, Geralt turned Elthon down. I cannot say if he concluded that collecting feathers would not be worth its while or if he simply did not want to deal with an employer who seemed strange, to put it mildly. Whatever the case, I never did learn why the mysterious collector retained an agent to help him satisfy his craving for harpy feathers.

For someone whose fetish for feathers rivals the desire which he-cats exhibit for she-cats in heat, even a pile could prove insufficient. the collector apparently wanted another eight plumes. The witcher had for some time sensed something fishy in the matter and now felt completely sure it was putrid in some way. Nevertheless, coin does not stink, so our hero seriously considered supplying another eight harpy feathers.
As it turned out, eight was the magic number. The witcher had never before seen anyone get so excited about a sackful of down. In fact, Elthon seemed moved when he received the last batch, a reaction far too strong for an ordinary purchasing agent. Curious to get to the heart of the matter, Geralt decided he would visit Elthon again later.
The witcher did as he had decided and showed up on Elthon's doorstep once more and unannounced. Please know, dear reader, that I have described the fall of empires and lovers dallying at the feasts of rich men. I have sung of the loud grief of solitary mourners, of the silent joy of many at the death of a usurer, and of the general outbreak of mirth that occurred when Archpriest Yanos farted during King Medell's coronation. I am unable, however, to find words to describe what Geralt saw, for there are some things in heaven and on earth of which even the philosophers have never dreamed. 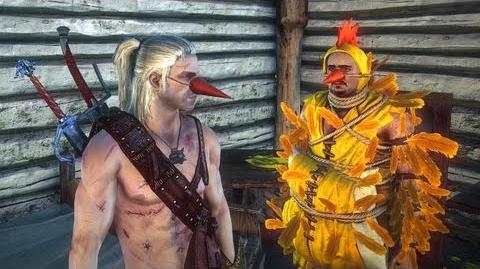 A Sackful of Fluff (The Witcher 2) Full HD