The Witcher
Abigail was a witch who lived in her house in the outskirts of Vizima. She was not well-liked by the villagers and got blamed for many bad or strange occurrences. Her main skill was alchemy, so though the villagers approached her with suspicion, they also relied on her for potions and poisons - which she provided, rarely bothering with questions or moral objections.

In the course of Chapter I, Abigail took in the orphaned Alvin after Geralt saved him from the barghests as Shani could not care for him from an inn. She also facilitated a trance where the boy revealed more about the beast and its minions who were plaguing the village.

Geralt can buy a blade coating formula from her that makes it easier to battle specters and ghosts. In fact, she buys and sells quite a few things:

If her fate was left to the villagers, she cursed Geralt in the name of the Lionhead Spider, which she called the Black Legba. Whether this meant she was also responsible for the misdeeds of the other villagers is unclear.

"A witch named Abigail lives in a village in the Outskirts. Though the villagers buy herbs and potions from her, she also faces much hostility."
if Geralt saves Abigail from the mob:

The Reverend informed the congregation that Abigail had uttered the Curse of the Hellhound and the witch was surrounded by an angry mob. I decided that she did not deserve to die, and saved her from being lynched. Abigail left the Outskirts for good.
I met Abigail again in the village of Murky Waters. The witch still trades in herbs and potions.

if Geralt leaves Abigail to be lynched:

The Reverend informed the congregation that Abigail had uttered the Curse of the Hellhound and the witch was surrounded by an angry mob. I decided not to interfere in the shadowy internal affairs of the Outskirts. The witch was burned at the stake just after I left. 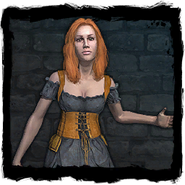