Witcher Wiki
Register
Don't have an account?
Sign In
Advertisement
in: Temerians, Humans, Characters in the comics,
and 3 more
English

Adda of Temeria was the daughter of King Medell and Queen Sancia, making her princess of Temeria as well as Foltest's sister, who became king after their father's death.[1]

Adda and her brother were very close as children and began an incestuous relationship that resulted in a pregnancy. It caused a scandal, and worse, Foltest began expressing a wish to wed his own sister. That would have offended King Vizimir II of Redania, who had hoped for his own daughter Dalimira to marry Foltest. Adda, however, managed to persuade her brother from his wedding plans. This child she carried was cursed (presumably either by Ostrit, who fell in love with Adda, or by their mother, who was furious about the incestuous union between her son and daughter) and both mother and child died just after the birth. Foltest ordered that the two be buried in the royal vault beneath his palace in Vizima.[1]

Seven years later, their daughter came back to life - but as a striga. The curse was eventually lifted by the witcher Geralt of Rivia after another seven years, and the young princess was named Adda, after her mother.[1] 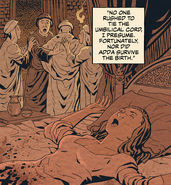 Portrait of Adda in the "Geralt" graphic novel.