Against the Blue Stripes

Given by Blue Stripes

Against the Blue Stripes is a quest in The Witcher 2: Assassins of Kings.

This is the fistfighting quest in Chapter II if Geralt sides with Vernon Roche at the end of Chapter I.

Geralt stumbles upon Roche's men sparring with each other to improve their skills. The witcher then offers to fight them, out of curiosity mostly, but also to help them improve.

First he must face Fenn, then Silas. At that point, Vernon himself appears demanding to know what is going on. Upon hearing that Geralt is sparring with his men, Roche challenges the witcher to a little one on one.

Geralt liked to watch Roche's soldiers training. Their fighting style was different from that of the witchers, it was tailored to tackling armed opponents. In turn, Roche's men were always curious about the witcher's techniques and gladly pried at them. After talking to several of them, Geralt decided to try holding his own against Vernon's subordinates, but without weapons, just using fists. Fenn was first in line.
Fenn lost, obviously, but the Blue Stripes were undeterred. Silas was more than eager to face Geralt.
When Silas was also beaten, Vernon Roche had no choice but to defend his unit's honor.
If Geralt defeats Roche:

It was a beautiful fight. I had my doubts about who would win for a long time. Yet if you had placed a bet on Geralt, you would have won. Roche lost, yet that was no dishonor in it. Vernon's soldiers, glad their commander had taken a beating, gave Geralt a nice piece of steel.

Either Geralt went about it half-heartedly or the special forces are even better than I thought – either way the witcher lost the bout. The soldiers were no longer interested in dueling Geralt. 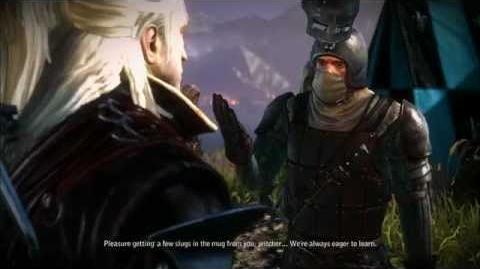 Geralt vs the Temerian Blue Stripes - Fistfighting (The Witcher 2 cutscenes) HD
Retrieved from "https://witcher.fandom.com/wiki/Against_the_Blue_Stripes?oldid=509269"
Community content is available under CC-BY-SA unless otherwise noted.