Anatomy of a Crime

Anatomy of a Crime

q2104_autopsy
Anatomy of a Crime is a quest which Geralt receives from Raymond Maarloeve in Chapter II as part of his investigation into the Salamandra organization in Vizima and his quest to find and neutralize its leader, Azar Javed.

After some time has passed since the detective is attacked by Salamandra assassins, Raymond decides to resurface by sending a messager boy to Geralt, inviting him to a meeting at the detective's place. During the meeting, Raymond tells the witcher that the "Crown Witness" has died and it's very likely that he's been murdered. An autopsy, if performed successfully, could pinpoint the potential murderer, who definitely commited the act to cover for Salamandra.

Since Geralt has never done an autopsy, the witcher turned to Shani asking for help. The red headed medic agreed and told Geralt to gather as much information as possible to help the autopsy. This essentially boils down to two things:

Alternatively, the witcher can obtain this information by simply talking to people. For Medical Science, talk to the gravedigger about the prisoner's corpse ("A prisoner died recently. Is he in the cemetery already?"). For Zerrikania, ask the Gardener about his mercenary days with a gift of food.

Regardless of the amount of information gathered, Geralt still has to get the body of the crown witness out of the cemetery and to St. Lebioda's Hospital so that he and Shani can perform an autopsy undisturbed. To do so, the witcher will have to get a bottle of "Dwarven spirit"(or "Mahakaman mead") for the gravedigger.

Once everything is settled, Geralt will meet Shani in the Hospital at midnight, starting the autopsy.

''Major Spoiler: The detective Raymond's identity has been assumed by Azar Javed!

For simplicity and accuracy, this critical knowledge will be refered to as the "Grand Truth" from this point.

If Geralt is still kept in the dark by now, the autopsy can end up implicating any one of the three as the murderer: Kalkstein, Ramsmeat or Azar Javed, providing a chance at beating Azar in his own game and uncovering the "Grand Truth".

For Kalkstein or Ramsmeat, no information is required to implicate one of them as the murderer, simply keep leaning towards one of them and Geralt will eventually make up his mind.

It's much harder to expose Azar's scheme however. For one, Geralt will need to gather both of the information about the autopsy: Medical Science and Zerrikania. Additionally, after the two has agreed that the body has clearly been gnawed at by necrophages post mortem, Geralt will also need to remain prudent and skeptical throughout the autopsy by choosing the following dialogue option:

If Geralt has learned the "Grand Truth" beforehand, the objective of the autopsy shifts from identifying the murderer to confirming the murderer and uncovering his method of killing. In this case, all dialogue options leading the autopsy to a misguided direction are removed and Geralt automatically figures out the murderer's method. No information is required either.

The quest ends alongside the completion of the autopsy. Geralt must now get back to the detective to share his newest findings, or does he now?

This becomes the active phase whenever Geralt has learned the "Grand Truth". This is the earliest position it can be.

I know Azar is masquerading as Raymond - I have proof. I should go ahead with the autopsy - not to learn the murderer's identity, but to discover his methods. The autopsy will reveal Azar's methods.

This only appears if you ask the gravedigger whether the body has been delivered to the cemetery.

The corpse hasn't been delivered to the graveyard yet, but at least I learned something of interest. I should talk to Shani.

This only appears if you ask Shani about the autopsy in the Hospital.

I have to call on Shani at her house - we won't be able to talk about the autopsy in the hospital. We need to stay low with this. I need to go to Shani's house and talk to her about the autopsy.

Preparations for the Autopsy[]

The gravedigger won't let me get the corpse. A bottle of vodka should convince him, I reckon. I should bring the gravedigger some liquor - best if it's dwarven.

The results of the autopsy confirmed my suspicions - Azar is a cruel and ruthless man. There are many ways to get rid of a witness; he chose the most malicious. I must remember that and I should not underestimate him. I must not underestimate Azar - the autopsy showed he'll stop at nothing. (2500 XP)

This only appears if the quest failed.

Given recent developments, proceeding with the autopsy no longer makes sense. I basically know all I need. I no longer need to do the autopsy. 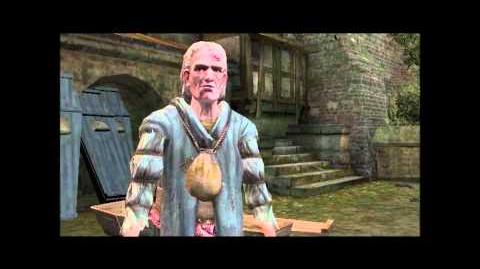