Witcher Wiki
Register
Don't have an account?
Sign In
Advertisement
in: Creatures, The Witcher 2 bestiary, The Witcher 2 Chapter I,
and 6 more
English

Arachas, or crab spider, is a large insectoid with a distinctly large abdomen. Described as an extremely venomous, its variants are found in both desert and swamp regions. The varieties found in the Ysgith tend to have mouths that resemble a large orchid.

Arachas armor
Arachas eyes
Amethyst dust
Diamond dust
Arachas trophy
Geralt encounters the Arachas in a forest clearing after meeting Iorveth. This takes place close to the end of Chapter I during the quest The Assassins of Kings.

The arachas is easily dispatched using a silver sword. It drops some reagents including the arachas eyes and armor. The eyes are used for restoring the power to the amulet in the quest Melitele's Heart.

On Roche's path, a second arachas is encountered at the end of a ravine northeast of the Kaedweni camp, near a lone dead conifer. There is a third arachas in a ravine guarding the Mage's Gloves, this is accessible to both paths.

On Iorveth's path, an arachas is encountered in the cave on the way into Loc Muinne.

By Chapter 2, Geralt's level should be high enough for the Arachas to not give XP when killed.

Arachnids are lone hunters - they patiently wait for their prey to kill it with one swift strike when it appears. The same is true for the arachas, a huge creature that took a liking of the riverside forest, becoming it's undisputed king. A ruler who does not tolerate other hunters on it's territory. Including witchers.
Arachasae are large, slow and protected by a durable armor. The carapace, as the witchers call this armor, is especially tough from the front, so it is much easier to wound the creature from the side or the back. The arachas' charges make an excellent for that - one has to evade the charge at all costs by stepping out the beast's way, and then make one's blow. Without doubt it's the best to use the strong style then.
The arachas has no fear of poison, and not much fear of fire. It's primitive nervous system barely reacts to wounds, and it's incredible vitality allows it to take even great wounds. The beast will heal them after the fight anyway, all the while digesting its prey.
All said and done, the arachas is a bug, so one's blade should be coated with the Insectoid Oil before fighting it. The monster's susceptibility to this blade coating is probably its sole weakness. The beast can easily all shrug off other witcher tricks, so common poisons and Signs are of no use, not to mention attempts to knock the colossus down.

N'aracche aen woed endicen [Let sleeping arachasae lie].
– Elven proverb
Powerful pincers, a maw filled with razor-sharp teeth and venom glands packed with deadly toxins – these creatures constitute the arachas' deadly arsenal. Since people and farm animals make up an important part of these creatures' diet, contracts on arachasae in turn constitute an important source of witcher coin.
Once native to the far south, this invasive species migrated north over the course of decades, adjusting as it went to new climates and temperatures. It found damp woodlands and swamps most hospitable and made them its home, making use of the much and moss found there as blankets during its winter hiberation. The arachas hides its unprotected, sack-like abdomen under a covering of hollow tree-trunks worn on its back.
At first glance, a stationary arachas often looks like a part of the forest undergrowth, a fact it uses to deadly advantage when hunting. It usually begins a battle by spitting venom, then tries to grab its prey with prehensile feelers in order to drag it within reach of its crushing pincers.

The Arachas hits hard plus its attacks are laced with poison. If players attempt to run away or keep a distance from this overgrown spider it will respond by shooting a sticky web stream which binds Geralt in place for a few seconds allowing the Arachas to charge in. Blindly hacking away at the Arachas from the front is unwise as it will cover itself with its pincers to mitigate damage and open Geralt up to a vicious counter-attack which can knock down.

Because of its size, Aard isn't going to knock it down no matter how high the Sign intensity. The other Signs are effective; Igni can immolate the Arachas allowing players to get in 1-2 strong hits, Quen nullifies the damage from one attack, Yrden slows the insect down to facilitate flanking and Axii keeps the Arachas pacified long enough to get into position for a slash at its less-protected rear.

The armoured arachas and venomous arachas can be fought using the same strategies and tactics as a regular Arachas, the only difference being the former taking more hits to go down while the latter's venom makes Golden Oriole a necessity for neutralising the potent poison. 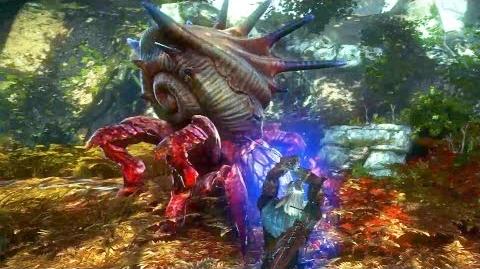 Concept art of arachas for The Witcher 2