Ardal aep Dahy was a Nilfgaardian nobleman and prominent politic during the reign of three Imperators: Fergus var Emreis, the Usurper, and Emhyr var Emreis.

Loyal to the Emreis family[]

He was among Imperator Fergus var Emreis' most faithful courtiers. After the coup staged by the Usurper, which resulted in the death of Imperator and removal of House of Emreis from power, Duke Ardal helped young Emhyr var Emreis to hide for a week and subsequently escape beyond borders of the Empire.

More or less twenty years later, in 1257, a partisan conflict ensued in which supporters of Emreises led by Duke Ardal and a group of front-line officers from his residence, defeated Usurper's forces.

Although he, along with Vilgefortz, was instrumental in removing the Usurper from power and placing Emhyr var Emreis on the throne, he, like many other nobles and members of the Merchants' Guild, later got tired of Emreis' endless wars against the Northern Kingdoms, which always ended in defeat. Beside this, Emhyr chose to marry Cirilla of Cintra instead of their daughters. Therefore, along with Joachim de Wett, Count d'Arvy, Berengar Leuvaarden, the Count Broinne and Stefan Skellen, he conspired to remove Emhyr from the imperial throne and put Morvran Voorhis in his place.

Conquest of Aedirn and Lyria[]

In the meantime, Ardal was tasked by Emhyr to lead the East Army Group in Aedirn and in Lyria and Rivia in order to conquer those lands.

Once in Lyria, Ardal ordered Vreemde to conquer the city of Dravograd. Vreemde, however, failed in his task, as Queen Meve herself, returning from Hagge with a small army, managed to defend the city.

When the queen returned to her capital, however, Count Caldwell, one of her trusted advisors, and her son Prince Villem, who secretly treated with Nilfgaard during the queen's absence, organized a coup and arrested Meve. Although the queen managed to escape, with the help of unlikely accomplices, Villem and Caldwell immediately surrendered to Duke Ardal aep Dahy's forces, who conquered the whole country without a single drop of Nilfgaardian blood shed.

Queen Meve, however, did not sit idly on her hands, and refused to surrender. She traveled to Aedirn to seek aid from King Demavend III, then on to Mahakam to treat with the dwarves, and through the swamps of Angren, all the while recruiting men for her army, growing from a rag-tag guerilla unit to a force to be reckoned with.

Ardal aep Dahy, in the meantime, tasked Gwalter aep Llwynog, posing under the alias of Xavier Lemmens, with infiltrating Meve's ranks and reporting on her progress. Eventually, once aep Dahy had decided Meve was no longer a mere nuisance but a potential danger to Nilfgaardian operations in the area, he ordered Llwynog to assassinate the queen. Llwynog, however, failed in his task and was himself killed in the attempt.

Eventually, after thousands of miles traveled and many trials endured, Meve returned to her country at the head of a powerful and highly experienced army of battle-hardened veterans. Immediately, she took it upon herself to liberate the countryside of the Nilfgaardians, all the way ploughing her way towards Rivia Castle and the city of Rivia, her home, which had served as headquarters of aep Dahy's operations for some time.

Meve sucessfully managed to retake the castle and liberate her people in the Battle of Rivia Castle, but Ardal aep Dahy, her nemesis, managed to escape her wrath to fight another day. He fled and took shelter in the city of Aldersberg, where he began to regroup his forces in a planned counteroffensive.

Battle of Brenna and Aldersberg[]

When the united North defeated Nilfgaard at the Battle of Brenna, King Henselt of Kaedwen and King Demavend III of Aedirn dispatched reinforcements to Queen Meve to assist at Aldersberg. At first, it seemed a final battle against aep Dahy was inevitable, but he mysteriously died of food poisoning beforehand.

Before he perished, however, a Nilfgaardian officer by the name of Caldwyn brought to aep Dahy a letter: an ultimatum signed by Emperor Emhyr var Emreis himself, who had found out about the conspiracy against him. The missive was concise and left no room for interpretation, and was accompanied by a vial of poison.

Without a commander, Nilfgaardian troops were easily defeated by Kaedwenian and Aedirnian troops in the Second battle of Aldersberg.[2][3]

Nordlings say the Nilfgaardian court is like a viper's nest. Nilfgaardians think it's cute. Just to survive there is a success. To move up the ladder, to exert your influence on the empire's policies, and emperor himself – you have to be the master of backstage deals and treacherous plots.

Ardal aep Dahy is just such a man. He rose to the very top – and then helped Emhyr var Emreis to depose the Usurper and became new Emperor's right-hand man. Now, on the cusp of a new war of the North, he has been entrusted with the leadership of the East Army Group. It can be interpreted in two ways – either as a great honour, or as a trap. Ardal aep Dahy knows that Emhyr expects nothing less than an immediate and complete success – and anything less than that could be used as an excuse to send him to the gallows. Of course, they're still close allies, but Ardal understands perfectly well that this can change overnight. He cannot give Emhyr any reasons to doubt his loyalties – or talents. But his main goal is not to win the war, but to ensure that once the peace treaties are signed, his head is still firmly attached to his neck.

Ardal aep Dahy doesn't wear plate armour and his sword is purely ceremonial, too blunt to cut a bar of butter. But don't let this fool you, he is a ruthless general. There's no oath he will hesitate to break, no holy site he'll refuse to sack, no amount of civilian lives he will not sacrifice in exchange for a tactical advantage. He fights with carefully phrased letters, not blades.
- Jr Community Manager, CARD LORE: ARDAL AEP DAHY 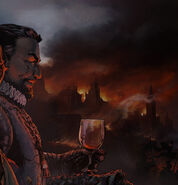