The beasts are trained and deployed in combat by hound masters; the hounds are armored and exceedingly fierce.

Immune to fear and resistant to stun attempts.

Armored Hounds are led by mutated beast masters; they act as reinforcements for other units.

Armored hound is a mutated and heavily armored hound of the Order is actually a small tank. It does not have a cannon, but it gladly lunges at opponents, knocks them down, and rips their throats open with a single snap of its jaws. Armored hounds are always hungry, so they usually devour their prey, which also makes them more fuel efficient than tanks.

During the first stage of research, we performed experiments on animals only. Having bred a mutated hound, we are certain that the potion formulae are suitable and if we administer them to human subjects, we will achieve exactly what we seek.

Developer CD Projekt's characterization of the armored hound taken from the monsterbook, which was enclosed with the Collectors Edition of the computer game The Witcher for Poland, Hungary and the Czech Republic:

Salamandra – the ominous organization which the witcher must defeat – uses animals in its initial experiments with mutagens. These attempts result in mutated bloodhounds: primitive, vicious creatures that beast-masters lead on chains before unleashing them to wreak havoc.

The creature's silhouette was modelled after that of a fighting dog. Its head evolved gradually into a shape similar to that of a pit bull's head. As with other monsters, we strove to make the creature resemble extinct beasts, predecessors of today's predators. The mutation pursued by Salamandra were meant to emphasize the wildest and most primitive characteristics of the bloodhound's ancestors, to some extent reversing evolution.

The crude armor in which the creature is clad underlines its barbaric nature. An armored hound of the Order wears kilograms of steel without noticing their weight or experiencing any discomfort. The armor protects the beast's vital organs and underlines that it is no wild monster, but a creation of man.

"Progress", he said solemnly, "will illuminate the shadows, for that is its purpose, just as, without looking far, the purpose of an anus is to shit. It will ever be lighter, we will fear darkness and the Evil lurking there less and less. There may come a day when we will altogether cease believing that something lurks in the dark. We will scoff at those fears, call them childish, be embarrassed about them! But darkness will exist forever and always. And Evil will persist in that darkness with its fangs and claws, murder and blood. So witchers will always be needed.'"
The Lady of the Lake 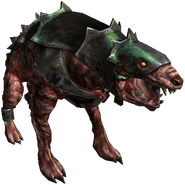 Details of the armoured hound's anatomy 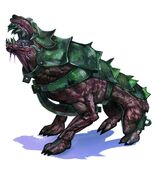 In this sketch, the hound resembles a dog even less

The armoured hound is a product of the first mutagen experiments
Add a photo to this gallery
Retrieved from "https://witcher.fandom.com/wiki/Armored_hound?oldid=513479"
Community content is available under CC-BY-SA unless otherwise noted.