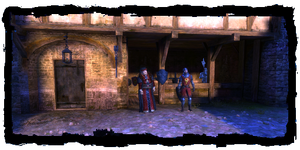 Armorer of the Order is more the name of the place, than of the individual. The "Order Armorer" himself comes from a long line of armorers. He and the "Order Merchant" run the establishment which can be found just opposite the steps leading to the slums of Vizima's Temple Quarter, on Roper Street. Their main competition is Malcolm Stein.

They will politely tell anyone that they only deal with friends of the Order. Here is how you can tell if they will deal with you.

The merchant sticks to mainly:

The armorer, on the other hand, buys an amazing variety of goods:

Retrieved from "https://witcher.fandom.com/wiki/Armorer_of_the_Order?oldid=509388"
Community content is available under CC-BY-SA unless otherwise noted.