Edit
watch 02:46
The Quarry - The Loop
Do you like this video?
Play Sound
Sub-Pages:

The Lady of the Lake (mentioned)

Artorius Vigo was a Toussaintois mage who specialized in illusion magic and was the uncle of Fringilla Vigo.[2]

Sometime after Toussaint became a duchy, Artorius helped assist the royal family. However, like many mages, he did keep a few things closely guarded, like the fact that Beauclair Palace had a secret area hidden by a powerful illusion by its original builders. His niece, Fringilla, followed in her uncle's footsteps and he passed on this secret to her as well.[2]

When Anna Henrietta and Sylvia Anna were children, he created a powerful, magical world centered around the Land of a Thousand Fables for the young princesses to play in. However, without proper maintenance the illusion started to become unstable around 1252.[3] 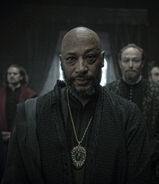 In The Witcher TV series