Assire var Anahid was a mage in the Nilfgaardian Empire's service who hailed originally from Vicovaro. She was a sister of Eviva, aunt of Mawr and Cinead var Anahid as well as grand aunt of Cahir Mawr Dyffryn aep Ceallach.

Assire was a founding member of the Lodge of Sorceresses and remained a member along with Fringilla Vigo, also in service of the Empire.

Thus she met with fellow countrywoman and sorceress, Fringilla Vigo. Fringilla was surprised that Assire had changed her style, choosing to wear more fashionable attire, as they prepared to leave to meet with the other sorceresses. It was during the meeting with the Lodge, when they discussed Ciri, that Assire revealed that Emhyr did not have Ciri but an impostor.[1] Assire took advantage of Carthia van Canten's relationship with the head of Nilfgaardian Secret Service, Vattier de Rideaux, and used it to spy on him, reporting any vital information to the Lodge.

Death in Loc Muinne and legacy[]

Because of the hazy circumstance surrounding her death, many speculations rose in the Empire, fueling propaganda and political conflicts for several years.[2]

At one point in Nilfgaard's history, images of sorceresses were destroyed very diligently and thoroughly leaving no relevant source of their appearance for future. In the 14th century, however, all of the Lodge's members were posthumously rehabilitated and given sainthood and martyrdom.[3] 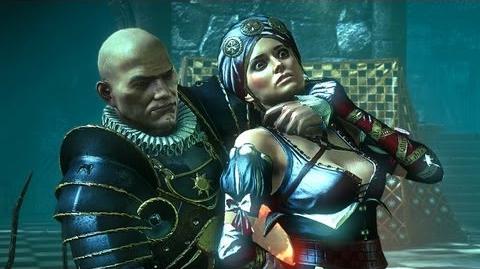