Assire var Anahid is a Nilfgaardian sorceress who hails originally from Vicovaro. She's a second cousin to Cahir. She was a founding member of the Lodge of Sorceresses and remains a member along with her countrywoman Fringilla Vigo. She took advantage of Carthia van Canten's relationship with the head of Nilfgaard's secret service, Vattier de Rideaux. She was also known for helping the emperor with military operations during the war. 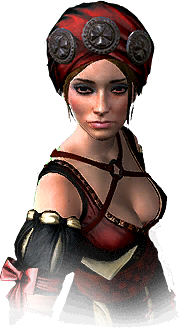 Assire var Anahid is a secondary character in The Witcher 2: Assassins of Kings.

Retrieved from "https://witcher.fandom.com/wiki/Assire_var_Anahid?oldid=132591"
Community content is available under CC-BY-SA unless otherwise noted.