The Assassins of Kings

The Dungeons of the La Valettes

At the Fore is a primary quest from Prologue in The Witcher 2: Assassins of Kings. It begins when Geralt is being interrogated by Vernon Roche in the Dungeons of La Valette Castle and is recounting all the prior events during the siege of La Valette Castle.

Choose the option "The assault" during the dialog with Roche to begin the quest.

Foltest and Geralt approaching the fortress walls in a siege tower. The door opens, and the king's company proceeds to scour La Valette's soldiers from the battlements. Protect and follow the king. This battle is not particularly hard, since Geralt is helped by Temerian soldiers. Both Aard and Quen can be useful. Enemies close to the edge of the ramparts are easily dispatched by Aard when it throws them off the walls.

When the first battle finishes, Foltest assigns two of his commanders to specific tasks, then asks Geralt for a suggestion to help penetrate a well-defended tower. Geralt spots a ballista in the courtyard still guarded by La Valette soldiers, and begins Barricade.

After accomplishing that task, Geralt returns to the king. They enter the next tower, where Count Etcheverry (if he survived the previous scene) and his men block the way. Since there are more skilled armored knights among them, Yrden, Axii, and Quen are particularly helpful here. When all the enemies have been defeated, king Foltest continues onward until he reaches a barricade at the base of a tower. The king's men are again blocked by crossbowmen atop another, higher tower, where the rebels' commander Aryan La Valette waits. Foltest asks him to surrender but the young baron has no intention of so doing. So the king orders Geralt to either end Aryan, or convince him to surrender.

Geralt approaches the tower, mowing down more of La Valette's men. Then he reaches the top to confront Aryan. (If you decide to fight him, it is advisable for Geralt to meditate before climbing the last step, to take some potions in preparation.)

The witcher and Aryan confront each other. Note that the choices made during this conversation will influence the course of The Dungeons of the La Valettes quest, as well as which attribute Geralt may obtain later on.

Geralt chooses to fight Aryan and his men:

This battle can be quite hard, so it is advisable to be prepared. There are archers on the edge. You need to kill them at first, protecting you with Quen. Try to dodge Aryan's knights blows. The best tactic is to take them next to the wall and cast Aard to throw them from it. You can also dispatch them using Yrden. When you have eliminated the most of Aryan's men, focus on their leader. When Aryan dies, the rest of his army will surrender at once.

Geralt convinces Aryan to a regular duel, without his men:

Fighting Aryan alone is not too difficult. Just dodge or block his blows. Then use the Signs: Aard can help to lower his guard, Yrden will completely eliminate it for a short while, Quen to deflect his blows. When Aryan is killed, his men surrender at once.

Geralt convinces him to surrender:

No battle is needed if you succeed in persuading Aryan. The young baron and his troop will drop their weapons and surrender.

The next episode of the back-story Geralt reveals to Roche is To the Temple!

The siege tower reached the walls and spewed forth its load of Temerian soldiers and knights. The battle was joined. Foltest fought in the vanguard. The witcher fought by his side, protecting the king. Led by these two, the soldiers moved towards the nearest tower, securing the walls one section at a time.
This was, as has been said, the family seat of the La Valettes, one of the most eminent houses in all Temeria. Brave soldiers loyal to Baroness Mary Louisa and her son Aryan defended it. The finest swordsman among them was the fair Sir Etcheverry, who stepped into Foltest's path atop the wall. This was a mistake, as it was the witcher who took up the knight's gauntlet.
The loyalist army pushed the enemy back, with Foltest at its head and Geralt but a step behind him.
The assault lost its momentum at the foot of a tower held by Aryan La Valette and a troop of skilled archers. Foltest was prepared to take heavy losses, but Geralt could not agree to more bloodshed without good cause. In addition to a strong arm, the witcher also possesses a lithe tongue, a fact to which many a sorceress can attest. He stealthily made his way to the top of the tower to parley with the proud, young baron.
If Geralt persuades Aryan to give himself up:

Geralt explained the situation to Aryan in simple, soldierly words. The baron belonged to a rare breed — he was proud and rash, but no fool. La Valette chose to spare the soldiers who had stood so loyally by his side and surrendered the fortress. Not everyone followed that order, but Foltest's victory was nonetheless assured.

If Geralt is forced to kill Aryan:

The rules of chivalry allow leaders to decide the outcome of a battle through a duel and thus spare their soldiers. Aryan was a man of honor and wanted to save the men who had stood so loyally at his side. He decided to cross swords with the witcher one on one.
La Valette was known as a consummate swordsman, but Geralt was no weakling, either. It was a fierce fight that ended with the young nobleman's death. His men honored the duel's result and surrendered the fortress. Foltest's victory was assured. 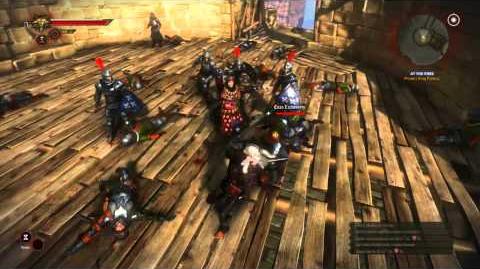 Retrieved from "https://witcher.fandom.com/wiki/At_the_Fore?oldid=509412"
Community content is available under CC-BY-SA unless otherwise noted.