Witcher Wiki
Register
Don't have an account?
Sign In
Advertisement
in: Elves, The Lady of the Lake characters, The Witcher 3 characters, GWENT characters
English

He died before he was able to impregnate Ciri; killed, possibly unwittingly, possibly not, from an overdose of an aphrodisiac or performance enhancer at the age of over 650 years. The drug was supplied by Eredin Bréacc Glas, who viewed himself as a more suitable ruler. 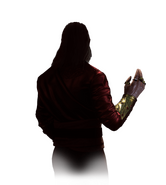