The Butcher of Cidaris
Ave Henselt! is a quest in Chapter II of The Witcher 2: Assassins of Kings if Geralt chooses Roche's path.

In this quest, Geralt has the opportunity to individually fight three Kaedweni knights in the arena. If victorious, he can then fight Ves.

Grand Tourney in the Arena!

By the will of our gracious King Henselt, I hereby announce the opening of sign-ups for a grand swordsmanship tourney to take place in the camp arena. As expert swordsmanship is a soldier's virtue, anyone familiar with the craft of war is encouraged to apply. Whether kinsman or foreigner, man or woman – if you fear not the sight of your own blood on sand, I await you by the arena.
Ave Henselt!
Proximo Woodblade

The quest begins when Proximo approaches Geralt in the Kaedweni camp (after The Butcher of Cidaris has been completed), saying that Henselt is impressed with the witcher's skills and has called for a tournament to be organized. Geralt can take part by speaking with him again at the arena between noon and dusk. There are four opponents, with opportunities to rest or prepare after each of the first two duels. Each duel ends when either the opponent or Geralt yields (by pressing the

The first opponent is Gwydion, a dual sword wielding warrior with no armour. The second is Rendag, a fully armoured and shielded knight. The third is Borin, a lightly armored two-handed sword wielder. Immediately after Borin is the dual weapon wielding Ves. Yielding to any of the three Kaedwenis will cause the quest to fail.

After the duel with Ves, speak with her at the Blue Stripes' camp to end the quest. If she yielded to Geralt, there will be an opportunity to have sex with her.

King Henselt loved gladiator fights. One might even say he was something of a connoisseur. Naturally, he was eager to see the witcher – a famed swordsman – enter the arena to face Kaedwen's greatest swashbucklers. It was not long before Proximo, master of Henselt's arena, approached Geralt, requesting that he take part in a tournament. The fights were not to the death, but the slashes and thrusts were not at all feigned and real blood stained the arena's sandy floor. Fights took place from dawn to dusk. The witcher considered the offer briefly before finding Proximo in order to sign up.
A man named Gwydion was first in line. He fought bravely, but could not hold his own against the witcher's blade. Geralt could now enter the next fight.
During his clash with Rendang [sic], Geralt had the chance to practice sword fighting techniques he rarely used, for Rendang proved an unexpectedly easy opponent. The witcher won hands down and qualified for the next duel.
Borin, his next opponent, gave it his all, but still lost. No more Kaedwenis were willing to face the witcher in a fair fight. Henselt grew furious as a sow deprived of her young, and then Ves challenged Geralt. The girl was excited and the witcher saw how badly she wanted to win, how badly she wished to show all the men who had lost to the witcher what she was made of. Our hero considered what was more important to him – winning, or losing and making Ves happy.
If Geralt yields to one of the Kaedwenis:

Geralt might be a witcher extraordinaire, but he was a meager gladiator. In other words, he lost the fight and fell out of the tournament, becoming a hero unworthy of my prose. I continued to record his other adventures only because he paid my bar tabs.

If Geralt yields to Ves:

The witcher decided to let Ves win, but he did it so clumsily that his intention did not escape her scrutiny. The girl bridled up and left, furious at the witcher. As you can see, Geralt could be grossly foolish and did not understand women at all.
The witcher tried to mollify Ves, but talk did not improve Geralt's situation. The girl, still furious with him, didn't want to hear his apologies. She had spent her entire adult life trying to match men and deal with discrimination, and had finally become the best soldier in Roche's unit. She saw the witcher's deed as an insult, for Geralt had presumed she was the lesser warrior. Our hero – having learned a lesson – decided to treat Ves as she deserved, but never managed to repair the damage. Thus ended the story of the arena fights.

If Ves yields to Geralt:

The witcher decided that Ves would be furious if he threw the fight. So he defeated her, though not without effort, thus winning the tournament as a whole. Having received his reward, he thought it would be prudent to discuss the girl's ambitions with her.
When Geralt talked to Ves after the tournament, he discovered that she was very pleased, as he had taken her seriously in the arena. You should know that the girl had spent her entire adult life trying to match men and deal with discrimination, and had finally become the best soldier in Roche's unit. Geralt had recognized her abilities and given her due credit. As the feeling of mutual respect grew between the two, the physical distance between them shrank. What happened afterwards, I shall not say. 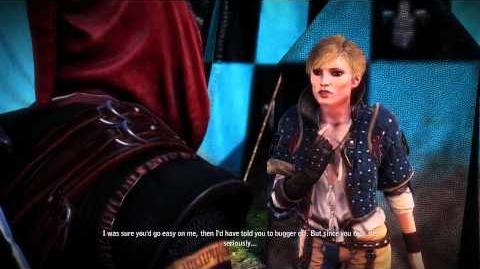