Hunting Magic
Baltimore's Nightmare is a quest in The Witcher 2: Assassins of Kings and is only avaliable on Iorveth's path.

The quest begins after viewing the Baltimore's dream crystal (silver in color) at the sealed off harpy lair beyond the old quarry.

Geralt witnessed various wonders in the harpies' nest. Among others, he saw the dream of Baltimore, a dwarf who had once lived in Vergen. Baltimore was now dead, his dream - in which he was running in terror - having become a reality. Before the witcher would discover that, however, he would have to find the dwarf's house.
Geralt found the building from the dream. It looked like a workshop. He was about to enter it when he noticed some craftsmen working at anvils nearby. The witcher decided that if anyone knew anything about Baltimore's fate, these dwarves would.
Geralt was right - the building from the dream had indeed been Baltimore's old workshop. His former home stood right next to it and was now occupied by a dwarf named Thorak, Vergen's new rune master. The witcher learned that its former owner had vanished without a trace years ago and was considered dead. The story intrigued Geralt. He knew Baltimore had been living in fear, so he suspected there might be a secret behind the dwarf's disappearance. He decided to investigate and started by conducting a thorough search of the abandoned workshop of the former rune master, who had experienced the terrible nightmare.
It appears that dwarves tend to hide maps and keys in old furnaces. Geralt cleared the soot from his discovery, and the curious Thorak did not voice a single objection to his destruction of the furnace. The note was written in Elder Speech, a language the witcher knew, of course. It said: 'Start looking at the well where loud echoes dwell. Take ten paces t'wards the river, a walk left and do not shiver. A meager two tens of paces, pass the gate in my good graces. The one that our safety keeps. Go where the crossroads' patron sleeps. Every road you need to take, yet the middle one is safe. Heed and look for Ingrand's signs, and you'll follow my designs. Should you choose to go right, you'll soon see someone in plight. At noon this drowned soul points its shadow at your goal'. Geralt knew that an Ingrand's sign is the symbol of the patron guides, shaped like a circle with a line traced from it. The line always points to a shelter.
If Geralt lies about finding Baltimore's notes:

Geralt understood that Thorak was only feigning indifference and in reality was very interested in his search. The dwarf was not to the witcher's liking. Our hero decided to continue his investigation while keeping an eye on Thorak. First he deciphered the notes.

Thorak could not believe his own eyes when the witcher showed him Baltimore's notes. He asked Geralt to immediately notify him of every discovery

The witcher found an Ingrand's sign. He went in the direction pointed by the line.
Following Ingrand's signs, Geralt found a key hidden by Baltimore. Now he needed to find the lock which the key fit. The witcher looked at the notes and followed the second path.
If Geralt refuses Thorak's deal:
Thorak shadowed Geralt the whole time. He had a guilty conscience. The letter found by the witcher was irrefutable proof that Thorak had killed Baltimore. Our hero decided the Vergen elder should learn of this.

Cecil Burdon was shattered by the news of Thorak's crime. In one stroke a murderer was discovered and a rune master lost. The elder began to ponder the situation, yet he did not forget to reward the witcher for solving the mystery.

If Geralt gives Thorak the notes:

Geralt was treasure hunting, and Thorak was spying on him. He finally told the witcher that recovering ancient rune lore, which had been lost with the previous smith, was of the utmost importance to him. Baltimore had been a genius, yet his talent had had a darker side - Thorak expected to find documents besmirching Vergen authorities among the hidden papers. Revealing these notes would cause a split in the town. And since Vergen's situation was difficult, any rifts would be very harmful. 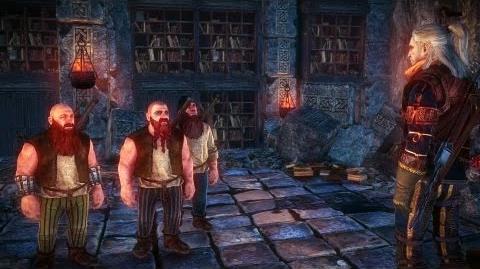