Witcher Wiki
Register
Don't have an account?
Sign In
Advertisement
in: Creatures, The Witcher Chapter I, The Witcher bestiary, Blood and Wine bestiary
English

Barghests are ghosts which come from the underworld only when summoned.

Barghests are fearless and cannot be poisoned; coming from the underworld they acquire bodies, so they can be stunned and experience pain, although they are somewhat resistant to these effects.

Barghests are sensitive to silver and very susceptible to knockdown attempts; the Fast Style is most efficient against barghests and experienced witchers use the Group Style while fighting multiple barghests.

They try to surround their opponent and work as a group – where one barghest appears, more will follow.

Barghest skull
Barghest are creatures summoned by the Beast and haunt Vizima's outskirts. There are those who claim they are ordinary dogs transformed into monsters by some curse; others believe they came from the spirit world to torment the town's inhabitants. Packs of barghests appear out of the blue, in the middle of the night, to kill those who are late getting home.

People say that barghests are specters which materialize as ghastly dogs and persecute the living. According to some folk tales these monsters are the scouts of the Wild Hunt. Other legends say the ghosts appear as a sign of divine retribution and embody revenge. However, all tales agree on one point: barghests show the living no mercy.

Shun sin! Renounce foul deeds! And if evil threatens to overwhelm your will, ponder the fate of the Outskirts of Vizima! Remember the hideous barghests which scourged them and repent!
– "Sermons for Feasts and Funerals," by the Reverend Yomen of Tretogor
Folk of simple or superstitious minds claim committing particularly rotten acts will bring down the wrath of the gods in the form of "barghests," phantom dogs which stalk the roads at night. Even if this were their origin, barghests saints and sinners alike would need fear barghests, for they attack both with equal ferocity. Witchers rarely believe in the gods, but they do accept that barghests exist and are always connected with some sequence of tragic events that happened in the past. Their explanation, however, holds that barghests result from a curse or a concentration of ill will.
Barghests, like wolves, are stronger in packs. Together they surround their prey, leaping at it and tearing it apart with their teeth. If their prey defends itself too determinedly, they strike it with a blast of phantom fire. Since they are fast and agile, they can easily evade attacks directed at them.
They cannot be burned, but fire hurts them as if they were of flesh and blood. The Axii Sign also works on them.

Barghests usually appear in packs like dogs and wolves and behave simillary, with two major difference. They occasionally charge at the player in great speed, temporally blinding Geralt. Also, when being attacked, they sometimes counterattack by spitting fire towards Geralt, potentially set him ablaze. Barghests tend to use their special attacks more often when in pack, so try to single them out one by one might make the fight a little easier.

Quen can be used to protect Geralt from the flames. Barghests glow up a little before they charge, so keep an eye on them for a good timing to dodge. Yrden can slow the monster down, but can't help much more. Barghests are immune to burning and bleeding but are vulnerable to specter oil.

A barghest can cross your path in The Witcher Adventure Game. This creature is not easy to defeat (level: Silver), you need: 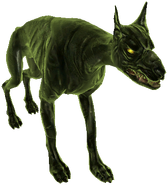 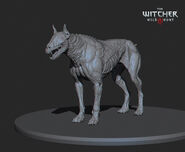