Witcher Wiki
Register
Don't have an account?
Sign In
in: The Witcher quests, The Witcher Prologue
English

q1007_berengar
Berengar's Secret is a quest which spans through almost the entire game. Our hero must first find and then question this errant witcher whose path seems to cross Salamandra's far too often.

Not long after Geralt wakes up at Kaer Morhen, he begins his quest to regain his memory. This entails mainly speaking to anyone and everyone who seems to know him and getting what information he can to piece together a picture of his missing past. One of the first things he learns is that there are very few witchers left, but not all of them are at Kaer Morhen. Notably one is absent, Berengar.

Throughout Chapters I and II, the witcher follows the trail left by Berengar but the latter manages to stay one step ahead, or maybe he is just dead? By the end of Chapter II, Geralt is convinced that he is, but in Chapter III, he gets news that Berengar is indeed still alive, but where is he? His path has clearly led him to Salamandra, but what then?

It is only in Chapter IV that Geralt finally finds Berengar and they get a chance to speak face to face, but it is not easy. It seems that the errant witcher cares not one whit how much trouble our hero has gone through to find him. He prefers to remain "lost" as it were and has no desire to talk about his motivation or actions. It takes a lot of prodding in the form of repeated visits before Geralt gets all the information out of him.

At the end of Chapter IV, things come to a head and the two witchers confront each other on Black Tern Island. At this point, Geralt can either challenge him to a duel (a certain fight to the death) or forgive him and move on.

If Geralt forgives him, Berengar gives him what information he has on Salamandra and takes his leave but returns to help the witcher during his final battle with Azar Javed at the Old Manor. If they duel, obviously our hero is the victor and must get the information from Berengar's remains. In addition to the notes he would have gotten if they parted peacefully, he also finds Berengar's medallion, a powerful amulet which is useful against Azar Javed in the final battle between the witcher and the mage.

My Kaer Morhen companions and I are not the only remaining witchers... Apparently, Berengar is also still alive. He stays away from the brotherhood and wasn't at the fortress when it was attacked. Where was he then? And who is he? If I ever meet him, I'll be certain to ask at least those questions. Vesemir mentioned another 'graduate' of Kaer Morhen - the witcher named Berengar.

Berengar in the Outskirts

This phase only happens if Geralt somehow missed being told about Berengar during the Prologue.

Another witcher recently visited this godforsaken hole near Vizima. His name is Berengar and he was not among us at Kaer Morhen. What's more, he disappeared instead of facing the Beast. I don't know him, but I can say that he's already made my life difficult by giving the villagers a reason to dislike us witchers. I hope to meet witcher Berengar, here or in Vizima.

This phase only happens if Geralt spoke to Vesemir in the Prologue about other Witchers.

A witcher named Berengar was here in the Outskirts before me. He promised to kill the Beast but then ran off leaving nothing but a bad impression. I'd like to meet him, talk to him. Maybe he knows something about the stolen secrets. I'm sure the witcher managed to get into the city. Maybe Berengar can help me find Salamandra. I'm sure he found a way into the city.

Berengar was captured by the Salamanders but managed to escape. The organization interrogated him. What did they ask and what did he betray? Only the witcher himself can answer that. Berengar probably fled to Vizima, I should look for him there. Berengar fled Salamandra and probably found a way into Vizima.

The guards got their hands on a witcher's sword. It probably belonged to Berengar... I need to talk to the fence who owns the place where the sword was found. Strange, but I find myself following in the footsteps of this mysterious witcher. I doubt he would ever part with his sword voluntarily, so he may be in trouble... again. I must talk to the fence who had the witcher's sword.

Hired by Kalkstein the Alchemist or Coleman

Hired by Kalkstein the Alchemist

The fence gave me some new information about Berengar. Kalkstein hired the witcher to do something for him. I need to learn what he was doing before he disappeared and if it has any relation to Salamandra. I'll talk to the alchemist. I must talk to Kalkstein about Berengar.

(these only happen if you allowed the Scoia'tael to take the weapons during Strangers in the Night OR spoke to Ramsmeat about Berengar):

Coleman is dead, killed with weapons that I put in the hands of the Scoia'tael. So much for that lead. Coleman is dead. I'll have to look for others who might have met Berengar.

Berengar's things were found by brickmakers. The items were covered in blood and the surrounding area showed signs of a fight. I fear Berengar may be dead. I'll look around near the clay pits, maybe I can find some clues. I should ask the swamp dwellers about Berengar.

I followed the trail of Salamander corpses and found the place where Berengar made his last stand. By the look of things, he sold his life dearly. When I see Vesemir again, I'll have to tell him of the death of another one of our caste. Berengar is dead. Sad tidings for Vesemir when I see him again.

Berengar is alive. The bad news is that he was probably captured by Salamandra. I have yet another reason to destroy Salamandra.

It seems Berengar is working for the Salamanders, though unwillingly. the Professor sent him out to find Alvin, so I'm sure our paths will cross. Berengar was sent to find Alvin. I'm likely to find him when I find the boy. 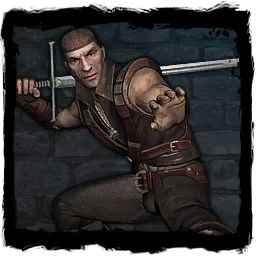 Berengar is a bitter man. He told me he hates the witchers and is miserable as a mutant who is resented by humans. He also admitted he worked with the Salamanders, partly because he sees no difference between their methods and those of the witchers. Berengar admitted that he worked with Salamandra. He should pay dearly for it...

Berengar's Second Death + Medallion or The Parting + An Ally

I followed in his tracks for such a long time, experiencing various emotions. Now I feel an eerie emptiness as I look at his corpse... Thus ends the story of the witcher Berengar. Berengar is dead. (4500 XP)

After following in his tracks for so long, I found myself unable to strike Berengar down. He's flawed and full of doubt, but he become a decent individual some day. I wonder how Berengar's story will end... Berengar went his own way. I doubt we'll meet again. (6500 XP)