Beyond Hill and Dale...

Beyond Hill and Dale...

The Night of Long Fangs

Oddly, this quest actually starts near the last few steps of The Night of Long Fangs but doesn't officially end the previous quest until you enter the Land of a Thousand Fables.

On entering the massive illusion, you won't have access to your maps and Geralt will note it's so powerful, there's no way to dispel the illusion. So, it's time to follow the yellow brick road to find Syanna. You can read the signpost in front of you if you wish. Otherwise, head west along the yellow brick road. Note that, possibly due to the illusion, your map's path indicator is off and will try to take you up a steep hill near the borders, so ignore it for now and just follow the orange objective indicator instead.

At the first path split, continue straight, then at the next go right. As soon as you start crossing the bridge, an archespore will appear on the other side. Once killed, continue along the path, jumping across the gap, and onwards until you come across another bridge and a nearby hut. Approach close enough for a cutscene where Syanna is trying to get someone out of the locked hearth. The Wicked Witch will then notice you and attack. Once she's dead, Syanna finds the key and open the hearth, letting Jack out and asks him about some beans and he states it's best to talk to Joss to learn their locations.

At this point you can now talk to Syanna and learn more about her before asking about the beans. She then reveals that, like the fairy tale, 3 magical beans are needed to grow a stalk that'll take you to a giant's castle in the sky and the location of the only other exit out of the illusion, as Anna Henrietta cut off the other route. However, the fablesphere is collapsing and while they won't attack Syanna if she doesn't attack them, Geralt is an unwelcome guest, so you'll need to keep an eye out for pixies on occasion.

Afterwards, head out the opposite gate from where you entered and follow the path through a dark ravine. In the widest part you'll come across some pixies. Once the group is dispatched, continue along the path until you come across some unicorns. Mount up and continue along the now dirt path and shortly you'll come across Joss, the boy who cried wolf who, true to his tale, is lying and saying everything's ok but he's in fact under attack by wolves. Kill them, then ask him about each bean and he'll lie, or rather "reverse the truth". Syanna will mention two options for the blue bean, as there are 2 groups in the fablesphere with 3 characters, but the other two can be narrowed down to one for each.

The red bean was swallowed by the Big Bad Wolf so from Joss, take the path that goes left of the tower then the right path when it splits again to find a red hut and a hungover wolf. Talk to him to learn he refuses to answer unless you partake in acting out the tale, but as Little Red Riding Hood is dead, you have no choice but for Syanna to act in her place but you need the red hood to do so. So jump into the well and her body (and the hunter's) should be right below you. Loot her for the hood, then follow the submerged tunnel out. Once you climb out of the water, Syanna will don the hood and you'll go bug the wolf once more. When ready, start to act the tale and be ready to fight him. Once dead, Geralt retrieves the red bean from his stomach. Important: at this point, Syanna will talk and, if this is your first bean, make sure to ask what happened to hear her story if you want to try and get a good ending later.

The yellow bean is hidden with Longlocks, high up in her tower. This one you'll do alone so climb your way up and then into the tower. As soon as you walk into her room, her wraith will attack. Like any wraith, eventually she summons others while she regenerates, so keep that in mind to quickly finish her off. Once done, loot the yellow bean from the pillow on her bed. To leave, climb up onto the platform, through the window, and dive into the waters below. Syanna will talk to you. If this is the second bean, she'll talk about Dettlaff and you can ask all the side conversations.

The correct location for this one is the Three Little Pigs. However, if you feel like exploring everything, you can go see the Three Bears as well. If you do though, don't loot the food off the table or else all 3 will wake up and attack.

Make your way to the northwestern point on the map to find the only house still standing: the brick one. Tear it down with Aard then prepare to battle 3 piglets. Their fighting tactics are identical to boars, so use the appropriate measures and kill them off. Afterwards, loot the bean off the lone table in the hut and, once again, Syanna will approach and talk for a third time, remarking on Geralt's joke. Choose whatever you like and then it's time to plant them. Important: before you do, make sure you take care of any quests in the area. Also, if you want to try for a good ending, you must visit the Little Flint Girl.

Approach the only normal sized looking settlement (to the north of Longlocks' tower) to see a young girl selling drugs. Talk with her and Syanna will see the girl's wearing a ribbon that was given to her as a kid for protection and demands it back as it's a small memento of happier times. The Little Flint Girl won't just give it for free though: you can either try to win against her at gwent or pay 500

for it. Important: to try and get a good ending, you must get the ribbon for Syanna.

Once you're taken care of everything, it's time to leave. Go to the field beside the small settlement and kill the pixies that appear, then use Witcher Senses to find the spot near the middle of the search area to plant the beans. Once done, a cutscene will start and you'll now be outside the Cloud Giant's castle. Except he's not exactly accepting visitors. Once you've killed him, depending on how you conversed earlier with Syanna, you have the chance to have sex. If you wish to do so, choose the first option ("Useful, how?" then "let her have her way with you"). If not, you can still choose to say no and it won't have any effect on the outcome.

Whatever the case, loot the giant, then head towards the bridge where a will o' the wisp is before you. If you want some loot, follow it around and down below the bridge and into a cave area where it circles above a campfire. Light it then after a moment, you can now pick up Gesheft. Exit out the other side and climb up the ledges on the right and make your way back to the bridge and enter the courtyard. There's nothing here to loot that you can take back with you when you exit the illusion, so just follow Syanna to the other side where the exit is, the well. Jump in and you'll be spat out into the fountain at Beauclair Palace where Regis is waiting. After a tense moment, it's time to head to Tesham Mutna Ruins. 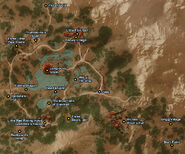 If Geralt sought out Damien himself:

Geralt ventured out to find Damien. As the duchess' confidant, he could very well have known where Syanna was being held. Yet locating the valiant captain hardly proved an easy feat. For swarms of vampires summoned by the enraged Dettlaff now prowled the city streets. In the end, the witcher tracked down the Palace Guard, which had been decimated in the fight. He draw[sic] the necessary information out of its wounded commander and proceeded on his way.

Just as Damien had advised, Regis and Geralt went to the playroom at the Ducal Palace. It seemed a strange choice for a prison, but Anna Henrietta was known to have oft unusual ideas.
The witcher and the vampire searched the room but found no sign of Syanna. They deduced she had to be concealed inside an illusion. the mage Artorius Vigo had created it years earlier, for the ducal daughters when they were but children. It was a fairytale land one could enter through the room...
The Land of a Thousand Fables was an extraordinary place. Now, it was also extraordinarily dangerous. For Artorius Vigo's spell, cast many years earlier, had begun to degenerate, change and grow wild. This was the result of something called magical entropy. The world's fairytale characters had grown unpredictable and aggressive - something the witcher got a taste of soon into his adventure there.
Despite these difficulties, he found Syanna. The witcher and the duchess' sister now shared a goal - both trapped in this magical land, they needed to find the way out. They joined forces. Syanna knew the exit from the Land of a Thousand Fables lay hidden among the clouds overhead. Their first task was to find magic beans that would help them ascend.
A boy named Joss would know where to find the magic beans. yet Joss - who obsessively cried "Wolf!" - was known by all to be a pathological liar. He proved hard to pin down, for his convoluted clues were the exact opposite of the truth.
By Joss' reckoning the red bean "had not been swallowed," though the one who had not swallowed it was the "most humany human in all the land." The blue bean, on the other hand, "Lay out in the open" watched over by "nobody" times three. The yellow bean, in turn, could be found "deep underground," a "bald farm-hand" its guard and keeper.
The witcher and Syanna found all the beans at last. They planted them and climbed the stalk that sprouted into the clouds. High in the sky they spied a castle, then the giant who called it home. "A giant," you might say, then tremble in your boots. But the witcher and his companion defeated it post haste.
Geralt and Syanna finally left the Land of a Thousand Fables. Meanwhile in the city, the massacre had raged unchecked. Yet Syanna had returned, so hope burned anew. If Dettlaff and his former lover could be made to meet, the vampires' rampage in the city could come to an end.