Blood of His Blood

Blood of His Blood is a quest in the Prologue of The Witcher 2: Assassins of Kings.

After Trial by Fire, Geralt, Roche and Foltest finally reach La Valette Castle's temple. Within are numerous common folk seeking refuge and praying at the central altar, as well as several priests and a disgraced nobleman. Foltest reprimands the latter, Arthur Tailles, a count he had condemned who was then "pardoned" and protected by Baroness Mary Louisa. Geralt questions the Archpriest for the location of the two children; he is given no choice but to use the Axii sign, to which Tailles strenuously objects. (Whether or not Axii actually succeeds, the Archpriest tells the truth: the children are in the solar, in the next tower along the castle wall.) The witcher then does have a choice - a simple one, whether to punch Tailles in the gut or to simply tell him to shut up. Then Foltest and Roche wait for Geralt to proceed with them toward the solar.

As soon as they begin the crossing, the dragon returns! Roche is separated from the other two in the chaos, and another round of dragon-dodging begins! This time, the dragon crawls along the top of the wall as Geralt attempts to drag Foltest to safety.

The best that can be done is to constantly move "down"; any variation results in the dragon's sweeping claw connecting and Geralt and Foltest each being either crushed or knocked to his death. One brief variation in this pattern (which occurs automatically, as long as movement away from the dragon has been constant) is when the dragon breathes fire and the men duck away from the area of effect. From there it is not much farther to crawl ...

Once they enter the solar, a gate falls shut and the dragon gives up again. Foltest waits for Geralt to accompany him upstairs, and once that happens, all that's left is a fateful cut-scene.

Priests can be very touchy about intruders defiling their temples, a fact to which desecrators of the Lionhead Spider's sanctuaries can attest. Luckily, this time Geralt had a less macabre cult to deal with, and the high priest turned out to be sensitive to changes in the political climate. After a few words, the witcher and the monarch were on their way to the solar, where they hoped to find the children.
However, before our heroes could reach the king's progeny, the dragon swooped down on them once more. The beast attacked with fury and fought relentlessly. Had Geralt been, say, a potter, only charred corpses and possibly some earthenware shards would have remained. But the dragon was up against a witcher, and after a fierce battle it was forced to turn tail. Geralt led Foltest to the solar, to Boussy and Anaïs.
The king found his children, the blood of his blood, only to die at the hands of an assassin disguised as a monk. On a temple floor with his throat slit open — so died Foltest, son of Medell, King of Temeria, Prince of Sodden, Sovereign of Pontar and Mahakam, and Senior Protector of Brugge and Ellander. Geralt failed to stop the murderer, and when soldiers burst into the room, they immediately and mistakenly identified him as the kingslayer. They piled upon the witcher, knocking him down and knocking him out. 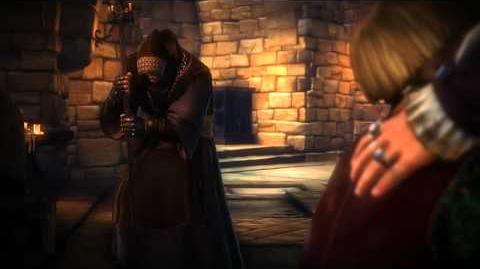 Blood of His Blood
Retrieved from "https://witcher.fandom.com/wiki/Blood_of_His_Blood?oldid=509576"
Community content is available under CC-BY-SA unless otherwise noted.