Bloodwing is one of nine optional trophy quests. It is obtained by killing a larger garkain, Vesper, which the Royal huntsman mentions. Only one trophy quest, The Beast of the Sewers, is not optional, making a total of ten.

Talking to the Royal huntsman in the druids' cave lets you learn about a garkain haunting the swamp cemetery. There are a couple of other garkains with him, and several wraiths might join the fight as well, so using Vampire oil is highly recommended. The target is set apart by his name, Vesper, and the fact that he is slightly larger than his compatriots.

Like with other trophy quests, bringing his head to the Royal huntsman will earn you money (1000

I turned in the trophy and collected 1000 orens. I received my reward for the trophy. (1000 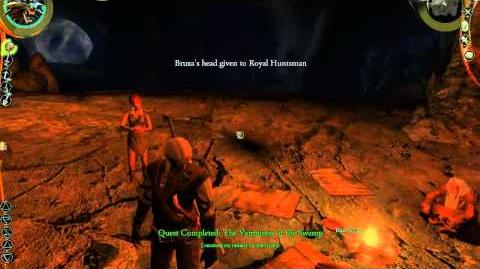 The Vampiress of the Swamp and Bloodwing
Retrieved from "https://witcher.fandom.com/wiki/Bloodwing?oldid=507867"
Community content is available under CC-BY-SA unless otherwise noted.