The Witcher 2: Assassins of Kings (mentioned)
Blood and Wine expansion (mentioned)
Boholt was the oldest member and also the leader of the Crinfrid Reavers, a group of mercenaries hired by King Niedamir to take part in the hunt for Myrgtabrakke, a dragon outside Barefield. The two of his compatriots were Kennet and Gar.[1]

Together with his comrades he managed to slay three red and one black dragon as well as wiped out all of the dracolizards and forktails in Redania. Their fame became so notorious that even Geralt of Rivia admired their skill.

For the main article on this hunt, see The Bounds of Reason.

In 1254 the Reavers were hired by Niedamir to help in hunting green dragon Myrgtabrakke. This turned harder than expected – Myrgtabrakke had a baby and was protected by golden dragon Villentretenmerth who injured Boholt's head during the fight.

By the time of 1271, when Kennet and Gar met again with Geralt, they could tell him only a sad tale of what became of their leader after the dragon hunt. They said to him that Boholt lost his memory after taking a spill and hitting his head on a rock. While he could "still be a beast in battle", he did nought much else and even lost his interest in women.[2]

He eventually recovered some of his memories and started training new Reavers, including Jamor and Auwry.[3]

Boholt in Netflix's The Witcher

concept for The Witcher 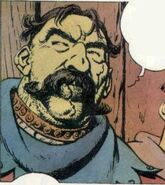