Lesser red mutagen
Monster ear
Monster blood
Monster bone
Necrophage hide
Rotting flesh
Monster brain
Botchling (Polish: poroniec) is a small creature, resembling a highly deformed fetus - created from the improper burial of unwanted, stillborn infants - that preys on pregnant women. While hiding beneath beds, botchlings sap the expectant mother of strength and once she is completely defenseless it will latch on and directly feed off blood, killing both her and the unborn child.

As botchlings are born from improper burial rites and were unwanted, one can transform them into a lubberkin by performing the elven naming ritual, Aymm Rhoin, and giving them a proper burial beneath the family's threshold.

Saying a botchling's ugly is like saying shit's not particularly tasty: can't say it's a lie, but it doesn't exactly convey the whole truth, either.
– Lambert, witcher of the Wolf School
Botchlings are perhaps the most repulsive creatures a witcher will ever have the displeasure of meeting. Born of dead, unwanted babies discarded without a proper burial, their appearance is that of a partially-decayed fetus, their unformed flesh twisted with hate, fear and malice. These hideous creatures feed on the blood of pregnant women, driven by a mad hunger that most often leads to their victim's death.
A botchling will emerge from its lair at night to lurk by the bedside of an expectant mother, draining her strength and that of her unborn progeny as she sleeps. A woman thus beleaguered first suffers from troubling dreams, then fever, delirium and a general weakening of the flesh. After a few such nights she is enfeebled and unable to defend herself - it is then the botchling attacks directly, sinking its long, sharp fangs into her body and drinking her blood until mother and fetus perish together.
A botchling stands around a foot and a half in height, but, when threatened and if gorged with blood, it can change form. At such times it grows into a deformed man, hunched over and striding, ape-like, on its forearms. Stronger and fiercer after this alteration, it hurls itself into direct, physical combat, gnashing at its opponent or attacking him with sharp claws.
A botchling's curse can be lifted by transforming it into a lubberkin - a guardian spirit of the hearth that watches over the family it never knew in the house it never could call home.

When threatened, botchlings turn into a bigger monster substantially rising in size and resembling a ghoul or alghoul when they grow spikes on their back. Using Axii though will make them retract the spikes for a short time, allowing one to safely strike them.

Concept art of the botchling for The Witcher 3

Gwent card art in The Witcher 3 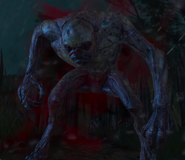 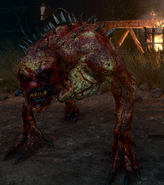