Edit
watch 02:59
Metroid Dread - The Loop
Do you like this video?
Play Sound

Deceased (killed by a bear)

King of the Skellige Isles
Jarl of An Skellig

Redhead woman (mistress)
Birna (wife)
At least one other (wife)[1]

The Last Wish
The Tower of the Swallow

Bran Tuirseach was jarl of An Skellig who ruled as the King of the Skellige Isles in the 1250s before the ascension of his brother Eist Tuirseach and again from 1267 until 1272.

Though initially a marriage of his nephew Crach an Craite and Princess Pavetta had been planned, King Bran managed to form an alliance with Cintra by marrying Eist off to Queen Calanthe in 1252. With crown passed to Eist, the bond elevated into a personal union.

After an interregnum following King Eist's death, Bran regained the iron crown of Skellige and ruled for a few more years. Once he felt too old, Bran set out to hunt a bear and died.

Born in 1192,[N 1] Bran had two siblings, brother Eist Tuirseach and a sister who later gave birth to his nephew Crach an Craite.[2] As a member of Clan Tuirseach, Bran eventually inherited the title of the jarl of An Skellig and thereby the clan's leadership.

After the previous Konung died, Bran submitted his candidacy and proved himself worthy by slaying a dragon named Evren. The display of valor won the hearts of the jarls, and Bran was given the crown.[1]

King Bran united the clans through the way unknown to his predecessors: compromise. He invited his rivals to banquets and with sweet words, coin, and barrels of mead persuaded most to join his side.[3] During one such feast, warrior Uve Jabberjaw got drunk and insulted the king. Angered, Bran let Uve live but ordered him to tear out his tongue and therefore retain honor.

At some point, Bran had met the love of his life Birna who, although not his first nor last lover, had always been closest to him and had become the mother of his firstborn son, Svanrige Tuirseach.[1] To keep rivals in check, King Bran was aided by his wife, who told him every suspicious rumor or deed that she had noticed during the feasts.[3] Aside from her, King Bran had druid Mousesack as an advisor and confidant. His brother Eist who by then rose to be the jarl of Skellige, commander of the armed forces, was an advisor as well.[2]

When Queen Calanthe of Cintra set up Pavetta's 15th birthday feast in 1252, would-be suitors arrived. Bran sent his nephew Crach an Craite with Eist, Mousesack and Draig Bon-Dhu as an entourage but the event turned out unexpectedly. While Crach didn't win Pavetta's hand, Eist married the queen.[2] Bran was pleased with the result as it seated the remote islands at the same table as the mightiest dynasties of the Continent.[4]

Despite his wife's repeated requests, the King refused to champion their son Svanrige as rightful heir to the throne. He perceived the concept of hereditary monarchy as preposterous and believed that the boy would earn the crown himself was he worthy.[3] By 1257, the crown has been bequeathed to Eist while Crach became the new jarl of Skellige.[5] The reign of his brother and Queen Calanthe, titled Ard Rhena (High Queen) on Skellige, lasted for over ten years until they died fighting the Nilfgaardian Empire.[6]

After a brief interregnum during which Jarl Crach an Craite was effectively the steward of the Isles, leading the Skelligers against the Black Ones,[7] Bran was reinstated as the king.[8] For the next few years, Bran continued to rule as before, keeping the clans under him and leading them on profitable raids. Nevertheless, he never united the jarls as one massive fleet which could more seriously threaten Nilfgaard.[1]

Bran lived long and reached 80 years of age in 1272. When his hands began to tremble and his ideas wandered off mid-sentence, Bran decided to go into the woods of An Skellig to hunt a great bear armed with only a knife and dressed in delicate cloth, leaving the world on his own terms.[3]

His body was put on a drakkar in Kaer Trolde Harbor by Tuirseach warriors with all items he could need in an afterlife. When everybody bid him farewell, his young lover willingly lay next to his body as the ship was set out to sea and set ablaze by his nephew, Jarl Crach. One shepherd sacrificed his best mare for the king, while a group of An Craite warriors offered Bran their manes, swearing to remain bald until a new king had been chosen.[1]

On the day of his burial, a wooden bust of Bran with detailed trimming was carved out by the harbor's artisans to be put up on the shore of Larvik where, the islanders believed, its fierce gaze would protect them from Nilfgaard. At the wake in Kaer Trolde citadel that ensued straight after the funeral, Bran was recalled as a hero by all present. Holger Blackhand remembered him fondly for keeping Birna in line and hoped for the next king to be his equal. With toasts raised to his memory, there were still likes of Cerys an Craite who felt Bran did little to resolve old quarrels.

To prove himself a worthy candidate to the crown, Blueboy Lugos set out to best his fears in the Cave of Dreams. He took along witcher Geralt of Rivia and two raiders, Uve Jabberjaw and Jorulf the Wolverine. Inside, Uve saw specters of Tuirseach warriors and Bran. As his fear of insulting Bran once more manifested, Uve had to defeat the ghost warriors before they could proceed.[1]

Inspired by their visit to the isles sometime prior to 1275, two brothers from Toussaint, Counts Igor and Martin Monnier, invented a Skellige Gwent deck and commemorated Bran on a leader card.[9]

Unlike the other jarls and konungs of Skellige, Bran knew how to use compromise to his advantage. In his early years, hospitality and friendly demeanor enabled him to easily win over any opponent and turn him into his vassal.[3] However, by the end of his reign, memory began to fail the elderly Konung and he could no longer unite the clans into one great force which may seriously endanger to the Nilfgaardian Empire.[1]

King Bran, former King of the Skellige Isles, lived a long and storied life. When he finally felt decrepitude taking a hold of him, he went into the woods to hunt a bear armed with only a knife – and thus ended his reign. It was remembered as an honorable and respected one, though some complained he preferred raiding to confronting the Isles' long-term problems, and that he let his wife's tongue wag too freely. Some connected the two, claiming Bran sailed out to fight overseas battles to put off dealing with the ones awaiting him at home.

Bran is a leader in the Homecoming version.

Scroll 1: They say it is easier to tame the seas crashing against Skellige's shores than the Skelligers themselves. Yet Bran did just that. He united the isles and the clans behind him – and long ruled with an iron fist.
Scroll 2: What was his secret? How did he succeed when others failed? Was it courage? Cunning? Intimidation? No, nothing of the sort. Bran tapped into a power previously unknown to the isles' inhabitants – compromise.
Scroll 3: When others would reach for ax and bow, Bran invited his rivals to banquet. With honey-sweet words, purses laden with coin, and barrels heavy with mead, it proved difficult to disagree with Skellige's king for long.
Scroll 4: Despite never slaying an ice giant or raiding the City of Golden Towers, Bran is remembered as a truly great ruler. Though not a hero in his own right, he delivered peace to the Isles, ushering in a period of growth and prosperity for the next generation of Skellige's champions.
Chest 1: Bran's closest advisor and confidant was his wife, Birna. During banquets, she always sat at his side, silent, nearly unnoticeable in the bustle. She could recall every uttered rumor, every knowing wink, every raised eyebrow. Then later, in the bear skin-adorned bed of the royal bedchamber, she would whisper into her husband's ear all that she had learned...
Chest 2: Despite Birna's repeated requests, Bran refused to champion their son, Svanrige, as rightful heir to the throne. He believed if the boy truly deserved the crown, he'd earn it without the king's intercession. If found unworthy, so be it. Bran found the Continent's long history of dynastic rule preposterous. Birna, on the other hand, could not be persuaded to feel the same...
Chest 3: Bran lived a long life – a very long life. When, just after his eightieth birthday, his hands began to tremble and his thoughts began to wander mid-sentence, he set out with a small hunting party. Wearing only delicate linens and armed with only a knife, he departed for An Skellig in search of a bear... And an honorable death. 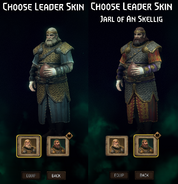 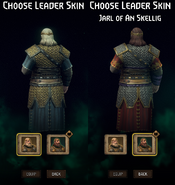