Brewess was one of the three Velen Crones in Crookback Bog. The other two were Weavess and Whispess and they were supposed to be the daughters of She-Who-Knows.

The Crone known as Brewess was the middle of the three demonic sisters in terms of age – but the first in terms of size. Brewess was said to be a master concocter of magical mixtures, and, in the more ghastly legends, was said to know over a dozen different recipes for human soup.
During the Crones' sabbath it turned out the sisters truly did feed on human flesh, cooking them up in infernal pots spiced with root from the cursed tree growing on Bald Mountain.
In the end Brewess shared Whispess' fate: she was slain by Ciri's blade. 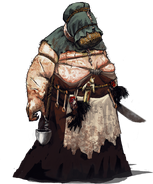