Brigida came from the Temerian Papebrock family and was formerly a lady-in-waiting of the Temerian court before she discovered the reasons behind the disappearance of Foltest's bastard son, Boussy.

A none too significant figure, Brigida Papebrock was a minor courtier who had the fortune or misfortune, depending on how one looks at it, to meet Vernon Roche. Though she lacked powerful friends, connections and patrons, she nevertheless managed to become embroiled in matters far beyond her capabilities. Brigida would surely have become the victim of a political murder if not for the help of the witcher, who agreed to escort her out of Loc Muinne.
Brigida was unique in that she was the only adult to have survived the attack on the convoy transporting Foltest's children to Loc Muinne. Thus, she had witnessed the events leading to Boussy's disappearance.
If Geralt fails to safely delivery Brigida (the quest fails):

Yet the witcher proved a poor bodyguard. He failed to lead Brigida to safety, and the young woman perished at the hands of hired assassins. 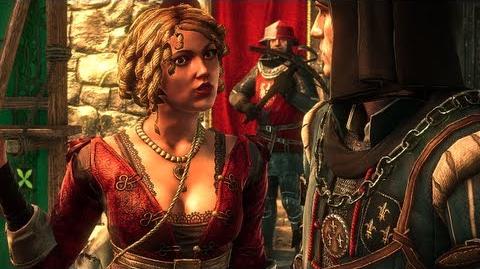 Retrieved from "https://witcher.fandom.com/wiki/Brigida_Papebrock?oldid=509629"
Community content is available under CC-BY-SA unless otherwise noted.