Able to communicate via telepathy or learn Common Speech

Invisible to magical scanning
Bruxa is a very powerful type of vampire that takes on the appearance of a dark-haired, young human, most often woman, but whose natural form is that of a large, black bat with sharp fangs and claws. It is one of few vampire species not affected by sun, the others being alps, mulas[1] and Higher Vampires.[2]

Bruxae are very agile and only silver swords are effective against them. While they have sharp claws for close up attacks, they can also let out a piercing scream from further away that can send even a grown man flying through the air. Only Quen is able to counter it, although the power of the cry can even break through it in certain situations.

The bruxae have the habit of singing in their native language, especially after they drank blood, and their songs are described as silent, shrill, and sickening. Thanks to these, bruxae can manipulate and bend to their will any human by altering their dreams and turning them into horrible nightmares.

Bruxae choose to live in ruins and abandoned human settlements, more rarely in caves and grottos.

They are fearless and resistant to stun attempts.

Sensitive to silver and Vampire oil

They attack by surprise, try to daze their victims and drink their blood

It is said that at night bruxae haunt attractive young men and drink their blood. These vampires move quietly in the dark to suddenly emerge near their victims. Bruxae are womanoids and may take the form of beautiful girls, leading some to mistake them for water-nymphs, but their long fangs and unrestrained thirst for blood always betray them.

They hunt in packs and use their screeching to knockdown prey

The bruxa is a higher vampire, that is a post-Conjunction creature, an intruder in our world. She appears as a beautiful woman, but when she is hungry or attacking, she is terrifying. As a vampire, the bruxa drinks blood. She often finds a victim to become her lover and a constant supply of sustenance at the same time.
The bruxa finds the smell of garlic to be socially inconvenient at most. And she considers holy symbols to be interesting examples of handicraft. She endures the light of the sun well, but she prefers the darkness of the night. As you see, you can stuff most stereotypical preconceptions about vampires up your arse when it comes to a bruxa. So what works? The blade of the silver sword, as usual. Apart from silver, she can be wounded with fire and a stake, provided that the latter is as long as a wagon's drawbar. A Bruxa is a womanoid, just like an Alp.
Less powerful bruxae often hunt in packs, making it easier to corner prey. If threatened, they attack with their talons and rip the victim apart, pausing only to savor the blood of their dying foe. The greatest threat to a witcher is the bruxa's voice. The creature can screech with such force that the shockwave will knock even a huge man down, making him easy prey for the vampiress. Blindness is as great a threat as this ghastly scream. Bruxae deprive their enemies of sight in order to play cat and mouse with them. Until sight returns, one should defend against their attacks in any way possible, for example by using the Quen Sign.
The bruxae have masterful control over their blood circulation, rendering poisons and oils that increase bleeding ineffective against them. They are good at defending themselves against witchers' tricks, but they are vulnerable to fire and can be knocked down and finished off as they try to get up.

Developer CD Projekt's characterization of the bruxa taken from the Monsterbook, which was enclosed with the Collectors Edition of The Witcher​ for Poland, Hungary and the Czech Republic:

In Sapkowski's stories this silent and seductively beautiful creature closely resembles a rusalka. In fact, she is a vampire, and one of the deadliest beings Geralt ever faces. The concept art, and later the model, had to capture all traits of this alluring yet frightful fiend.

The bruxa is built on contradictions. Her white pupils and blank face contrast sharply with her feminine silhouette. The long scarlet claws could be an elegant body adornment or simply marked with the fluids of a recent victim. Dried blood covers her breasts and mouth, leaving no doubt that the bruxa is a vampire, a monster in a beautiful woman's body.

The enlarged image of her torso reveals the texture details. The bruxa's skin is ghastly pale, wrinkled, and somewhat transparent, rendering visible the blood vessels underneath.

In the game, these female vampires inhabit dark crypts and ancient ruins. They approach gracefully and are easy to overlook. The abrupt attacks of bruxae stun Geralt; while he is helpless, they suck his blood to regain strength. The wound they inflict hemorrhage intensely. An eerie cry echoing through corridors indicates an approaching bruxa – at once both beauty and the beast.

She was clinging to the back of the dolphin in the dried-up fountain, embracing the moss-overgrown stone with her tiny hands, so pale they seemed transparent. Beneath her storm of tangled black hair shone huge, wide-open eyes the color of anthracite. ( ... ) The creature glued to the dolphin's back followed him with her eyes, turning her petite face with an expression of longing, and full of charm. He could still hear her song.
pg. 62 and 82, The Last Wish (UK and U.S. edition)

Bruxae were supposed to appear in the base game during its development in 2013 - 2014 but they were removed according to leaked materials.[5]

In the final game there is a gwent card with a picture of a Bruxa as a part of the Monsters deck.

Also the female vampire from A Night to Remember is, according to the developers, none other than a bruxa.

The Bruxa of Corvo Bianco

Moon dust
Black Blood
Vampire oil
Yrden
It was confirmed by some of the very first gameplay videos that the Bruxa is an enemy in the second expansion.

If you must travel through the woods, steer clear of any places where you can hear several different kinds of birds at once. That sound means you're entering a bruxa's territory and can kiss your life farewell.
– anonymous piece of advice
Fortunately for us all, bruxae are rare creatures. Most live far from population centers, for they care greatly for their own safety and make their lairs in places where they cannot be taken by surprise. Those who decide to live near men avoid crowds and emerge from their shelters only at night. When they do, one could almost mistake them for delayed travelers hurrying towards their night's lodging, yet subtle details give them away: their close ties to birds, their piercing voices and the breathtaking speed of their movements. Bruxae are far swifter and stronger than men, but their greatest asset is their ability to turn invisible.
Bruxae dart about with uncanny speed, and with their power of invisibility they can easily confuse opponents and attack unexpectedly or from behind. Thus when fighting these vampires the Moon Dust bomb is a great aid – while it cannot eliminate the vampire's invisibility altogether, it can make it easier to track its motions. A generous smearing of vampire oil is also effective.
Bruxae use their sharp claws to attack and can easily break through an opponent's guard by buffeting him with a hail of blows from all directions. They will try to bite their prey and drink its blood once it is weakened, so every witcher who expects to encounter such a monster should swallow a Black Blood potion beforehand. Bruxae are also known for their sonic attacks, which knock down and stun their prey.

If the Aard sign is used on any bruxa you encounter in Toussaint, it is possible she can fall over and be killed by a single stab, similar to how harpies are defeated. Bruxae can turn invisible during the fight and perform strikes without being seen, making them dangerous foes.

The Moon Dust bomb is effective against bruxae, although not needed due to their slight visibility when moving while cloaked, it is noted, however, that you will not be able to lock on to the bruxa, thus making Geralt swing in directions without the usual precision. Yrden is extremely effective against bruxae as the vampire will uncloak when in range of the sign.

You easily can one-hit kill any bruxa by using a combination of Yrden and Aard Sweep. Cast Yrden immediately in an open area (a basic level Yrden can do the job). Pay attention closely to the cloaking distortion so you can clearly tell when they're about to close in on you. Once their cloaked selves are within the Yrden trap, immediately cast Aard Sweep, immediately knocking them back, but making sure they're still inside the Yrden trap. The trap will slow them from getting up significantly, giving you plenty of time to close in and one-hit kill them. This works on The Bruxa of Corvo Bianco as well, even on Death March. 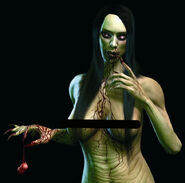 Close-up of a bruxa with detailed textures

model in The Witcher 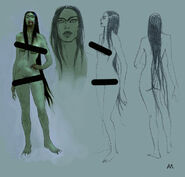