Found in caves and caverns

Spitting acid and rushing its prey

Bullvore brain
Necrophage blood
Necrophage teeth
Necrophage eyes
Necrophage skin
Cloth
Twine
Bullvore trophy
A bullvore is a creature in The Witcher 2: Assassins of Kings that, along with numerous rotfiends, can be found in the abandoned mine in Vergen. There is also a bullvore in the rotfiend cavern beneath the Kaedweni camp.

The bullvore can be compared to a heap of muscles constrained by a sack of hard, elastic skin. It's head is that of a buffalo's, yet it's mouth is filled with sharp teeth adapted to rending flesh. Bullvores are post-conjuction beasts. The visible mark of Chaos are the horns and vestigial hands the creature barely moves, growing all over its body.
This monster does not like the company of its own kind. One might even say it is like a poet in that it is an individualist. Much like an artist, it likes to show off before its lessers, thus it is at times accompanied by smaller, weaker beasts like nekkers and rotfiends. Bullvores are prone to giving peculiar displays wherein they kill their retinue in a fanciful manner, for example, by spitting acid on rotfiends that, in turn, explode.
As they are slow creatures, the strong style should be used when fighting bullvores. Their skin is tough, so they easily shrug off weaker blows, apart from which they heal as quickly as trolls do. A bullvore can kill slower opponents with the sheer momentum of its terrible charge. One should wait for this attack and dodge it, as immediately after it rushes forth and misses, the bullvore will be stunned and thus defenseless. The bullvore uses a terrifying weapon against swifter foes: it vomits filth that is both caustic and poisonous, so its foe both chokes on the venom and dissolves into a puddle.
The bullvore is a necrophage, so it should be fought using a blade coated with Necrophage Oil. This coating aggravates the beast's wounds and gives the witcher a huge advantage. There's no point in preparing common poisons or oils that increase bleeding, as the creature is immune to both. 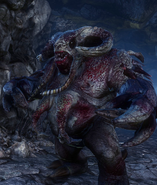