Buried Memories is a quest which is given to Geralt by Mikul, a guard at the Merchants' Gate in the Outskirts in Act I. It is one of three sub-quests spawned by Of Monsters and Men, the other two being Strangers in the Night for Haren Brogg and The Secret Garden for Odo. 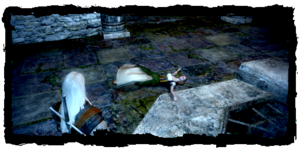 In the course of his investigation into Salamandra, Geralt must gain the trust of entire village in the Outskirts. Most notably, he must earn the trust of the three most prominent citizens, Mikul, Haren Brogg and Odo. A little convincing is required before Mikul will talk, but once he does, Geralt learns that he needs to have a crypt cleared of it's most recent inhabitants, dead'uns.

Clearing the crypt would allow Mikul's fellow City guardsmen to go on a much talked about treasure hunt. The task is not too difficult. There are about six ghouls to be dispatched. A lone ghoul attacks initially, followed by two more and then, in the larger chamber with the Circle of Elements, three more attack. Kill them all, collect any useful skinnable items.

Sadly, along the way Geralt discovers the body of a young woman, Ilsa, who has apparently taken her own life with a vial of poison. He reports back to his employer who is most distraught to hear of Ilsa's fate. It seems Mikul loved Ilsa. He immediately blames the local witch, Abigail. But the crypt has been cleared so payment is requested and collected.

It seems the girl from the crypt was Mikul's beloved, Ilsa. The guard accused the witch of poisoning Ilsa. Mikul also told me that the Salamanders all have passes and leave and enter Vizima as they please. I earned Mikul's trust. (200 orens, 3000 XP)

Retrieved from "https://witcher.fandom.com/wiki/Buried_Memories?oldid=52785"
Community content is available under CC-BY-SA unless otherwise noted.