By the Gods - Stringing Up Sods is a quest from Chapter 1 in The Witcher 2: Assassins of Kings.

Upon arriving in Flotsam, Geralt and his party are directed to the town square as an execution is taking place. ("Directed" is no understatement: all gates out of Flotsam are blocked until after the execution.) When the group reaches the square, they see none other than Dandelion and Zoltan on the scaffold along with two elves. The witcher must then find a way to stop his friends from being executed.

If Geralt is beaten by the guard or takes too long to finish him, the executioner will proceed with his orders.

As Loredo completes his performance and departs, inviting the witcher to a more private discussion later on, this quest proceeds to the next phase and Indecent Proposal begins.

Entering the inn, Geralt finds Dandelion, Roche, and Zoltan gathered at a table. Triss roams the ground floor; her two new topics of conversation are unrelated to the quest. She joins the others at the table as soon as the witcher opens conversation with them. Geralt can catch up with Dandelion and Zoltan's exploits (the former has become an informant for Roche, and the latter was nearly married), ask a pointed question or two, and attempt to satisfy their curiosity about the dragon at La Valette Castle; then he defers to Triss, who catches them up on Temerian politics (ask about a "resolution" to gain a journal entry on John Natalis). Geralt then recounts the story of the assassination - and then a disturbance draws the party outside to the docks. As the scene shifts, this quest ends, granting 300 xp: however, any potential talent spending must wait until one additional cut-scene and a couple of dialogues as The Kayran begins.

Cultural events are rare in the province. Thus it is unsurprising that when a rarity like the hanging of collaborators takes place, the whole town turns out. And when in Nilfgaard, do as the Nilfgaardians do. Geralt and company proceeded without hesitation to the scaffold square to partake in the local entertainment.
And at this point I enter the scene. I, Dandelion the unequalled, as described by some ladies: poet, lover, secret agent, friend and confidant to Geralt of Rivia. And at that moment a legal corpse with a noose around my neck. On the scaffold I was flanked by the dwarf Zoltan, also a friend of the witcher, and elves whom I never met before. As they say, a Rivian once volunteered for the scaffold so a condemned criminal would not hang alone, but I had no desire to die. Geralt had to find a way to free me, especially since I was Roche's aforementioned Informer.

Saved by Geralt, I breathed a sigh of relief, while Zoltan wiped sweat from his brow. The world would keep the greatest of its living poets. There was no end to the greetings, and that's when I learned about the events which had brought Geralt and his company to Flotsam. As a well informed man, I could aid them in their search, thereby repaying my debt of gratitude. Roche and Geralt questioned me about Iorveth and Letho, and I told them everything I knew. 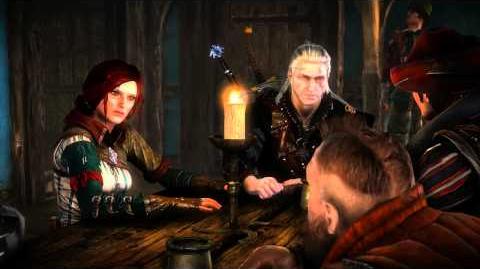 Reunion with Dandelion and Zoltan

Retrieved from "https://witcher.fandom.com/wiki/By_the_Gods_-_Stringing_Up_Sods?oldid=495353"
Community content is available under CC-BY-SA unless otherwise noted.