By the King's Will is one of the first quests in The Witcher 2: Assassins of Kings, triggered when Geralt tells Roche "The King summoned me."

Geralt and Triss are rudely interrupted by a soldier reporting that King Foltest has summoned the witcher. There is time to discuss a few matters (including a scout's incredible report of a dragon) with Triss as Geralt equips himself. Then be on the lookout for orens, crafting materials and herbs along the sides of the path on the way to the king. Geralt can also get a few extra orens from a recruit (standing alone by a tent) by reminding him that he owes for a cockatrice the witcher dealt with.

Close by in the exercise yard are training dummies to work on Geralt's targeting, swings or footwork, and an early chance to try out two of the minigames, arm wrestling and dice poker.

To the east, the king attends to his artillery. Today's ultimate goal is to secure his children, Anaïs and Boussy La Valette, who are being held in the solar of a temple within the fortress. Shilard Fitz-Oesterlen, ambassador from the Nilfgaardian Empire, makes his first appearance, needling Foltest about questions of the royal succession.

Foltest describes the virtues and singular flaw of the ballista to Shilard, and on the way to inspect one of them, promotes a guard he recognizes to the rank of decurion. He then introduces one of his ballistae - actually the queen's: birthday 'presents' from a previous year. Shilard relents from his questioning and returns to camp, and Geralt may choose one of two ways to humor the king when he asks whether he was "patient and courteous", as Foltest says Triss advised.

With a spyglass he then recognizes Count Enzo Etcheverry atop the castle's walls and orders that the ballista prepare to fire. Tossing the spyglass to Geralt, Foltest tests our witcher's forward-observer talents: If the correct firing angle (1.5 degrees) is chosen, Geralt will face fewer enemies later on.

Eventually Geralt and the King enter a siege tower, climb to the top and prepare for battle. The back-story continues with At the Fore.

Ever since Geralt saved Foltest's life, the king had been fond of keeping his favorite witcher close by his side. Thus, when the monarch laid siege to the walled town and castle of the mutinous Baroness La Valette, Geralt found himself whiling the days away a few tents down from the king's own, in the company of Triss Merigold — a sorceress, the witcher's lover, and Foltest's royal advisor. These were pleasant moments, despite the mild restlessness that plagued our hero. Finally, on the day of the assault, he was summoned before His Royal Majesty. And that is how his troubles began.
At that time, King Foltest was playing host to Shilard Fitz-Oesterlen, the Empire of Nilfgaard's senior emissary. The monarch and envoy were conferring when Geralt arrived as the hour of the assault drew near. The confident king and the witcher — making the best of a tense situation — moved to join the king's forces in the siege tower.
Propelled by the soldiers' mighty shoulders, the siege tower rolled towards victory. Green recruits shat themselves, veterans drank deeply from tightly clasped flasks, Foltest boasted and roused his troops, while Geralt struggled with a sense of foreboding. 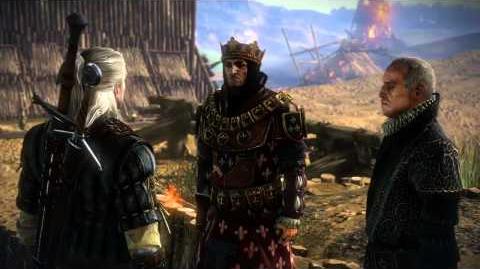 By the King's Will

Retrieved from "https://witcher.fandom.com/wiki/By_the_King%27s_Will?oldid=494137"
Community content is available under CC-BY-SA unless otherwise noted.