Cáelmewedd (meaning Quiet Child in Elder Speech) was once a beautiful and glorious Aen Seidhe complex now only known as elven ruins. It lies near Flotsam Forests in Kingdom of Temeria (likely Ellander duchy). The baths themselves are below a garden with a statue of Eldan and Cymoril. 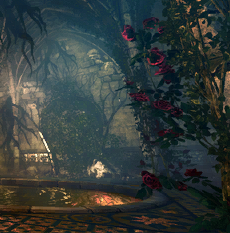 In The Witcher 2: Assassins of Kings they are discovered under name Ruined elven bath by chance by Geralt and Triss when they accidentally fall into them after being ambushed by bandits in the garden nearby after finding roses of remembrance.

Triss remarks that the baths are far more beautiful than humans could have built. Geralt then has the opportunity to invite her for a romantic dip.

Later, that pleasant interlude is unceremoniously interrupted by Vernon Roche.

Before leaving, a crumbling wall behind vines can be broken with Aard to reveal a slightly larger room containing a chest with orens and throwing knives. This is allegedly a story location later on however it can be explored beforehand at least on the most recent EE edition of the game.

The inhabitants of Flotsam and its surroundings described the nearby elven ruins in less than flattering terms. They mostly limited themselves to "A heap of stones, m'Lord. Don't be goin' there alone, or a nekker will catch ye" and other similar phrases. I learned more when I bought Cedric a drink. Where bindweed and briar entwined splintered marble, buildings of captivating beauty had once stood. Today only the ruins of the baths and elven statues remain, testifying to the past splendor of the place.