Edit
watch 09:46
'The Witcher' Lore: Who is Cranthir Ar-Feiniel
Do you like this video?
Play Sound

Caranthir Ar-Feiniel[1], also once known as the Golden Child, was a navigator of the Wild Hunt, and was one of Eredin Bréacc Glas' most trusted men.

He was a product of Avallac'h's attempt of selective breeding between elven couples gifted with the ability to manipulate time and space. While he was talented, he became a criminal and joined Eredin in the Wild Hunt. According to Avallac'h, despite Eredin's indifference towards Caranthir, he was eventually recruited into the Hunt for having passed the trials Eredin had set up for him. Described by Ciri to be "secretive and pragmatic", one of the notes found in Avallac'h's laboratory suggested he also had a "rash temper", a "tendency to take foolish risks" before he was enlisted into the Hunt, as well as having some pride in his capabilities. During the hunt for Ciri, Caranthir explored the hideout of Avallac'h. He later participated in the battle at Kaer Morhen. He dueled against Eskel, exploiting his teleportation magic to nearly kill the witcher, until Ciri stopped him, and he was called away before he could finish the duel. After Imlerith killed Vesemir, Ciri used a magical scream that caused all those in the affected area to suffer and eventually die. Caranthir opened a portal away from Kaer Morhen and dragged his king through it.

When the Wild Hunt was lured to Undvik, Caranthir used his magic to freeze Geralt. Ciri confronted the general and was able to break his staff, allowing Geralt to break free from the ice. Caranthir tried to abduct the seemingly unconscious Ciri, but she teleported away, and Caranthir fought against Geralt. Geralt impaled the Navigator, but before he could die, he grabbed Geralt and teleported them deep underwater, where Caranthir continued to bleed out and sank into the depths. Geralt swam to the surface and survived.

This Aen Elle elf was one of Eredin's advisors and also, on account of his extraordinary abilities, an important officer of the Wild Hunt. Calling on arcane magic Caranthir would guide the Riders of the Hunt along mystic pathways through time and space in order to reach other worlds.
He was also a master of more immediate forms of transport, such as the teleportation he made ample use of during the attack on Kaer Morhen.
Yet even with his tricks and spells Caranthir still died during the final battle against the Wild Hunt, his body swallowed up by the cold waters of the ocean.

Caranthir is Eredin's second most-trusted lieutenant. His unique abilities have made him a key officer for the Wild Hunt, responsible for guiding their expeditions across the expanses of time and space that separate the Aen Elle's world from others.
His very appearance—gray, fur-lined coat, fancifully-capped helmet, steel staff tipped with a sphere emanating magic energy—makes Caranthir stand out from the other warriors of the Wild Hunt. He stands out in terms of abilities as well, as he is also a powerful mage who relies in combat first and foremost on his spells and supernatural powers. He may not be as dangerous as Imlerith in a direct fight, but he can swing his steel staff with murderous speed and agility—something which his opponents will get to witness firsthand during The Witcher 3.
pg. 155, The Witcher 3: Wild Hunt Artbook 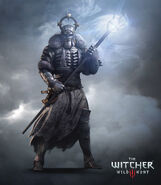 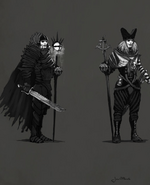 Caranthir proving to be too much for Eskel.