Edit
watch 02:05
Wiki Targeted (Games)
Do you like this video?
Play Sound

Blood of Elves (mentioned)
Time of Contempt
Baptism of Fire

The Witcher 2: Assassins of Kings
The Witcher 3: Wild Hunt (dependent on actions in previous game)
Carduin, also known as Carduin of Lan Exeter, or Carduin of Kovir, was mage and member of the Council of the Brotherhood of Sorcerers, during the Thanedd coup.[1]

In 1267, he helped Geralt bring the wounded Dorregaray to Marti Södergren during the Thanedd coup. He was considered a neutral participant and survived the incident.

Carduin was the main spokesman for the new Council and Conclave during the deliberations in Loc Muinne. Also using the Dearhenna's Megascope he can be seen plotting conspiracy together with Radovid V during a game of chess.

Carduin of Lan Exeter had once been a member of the Council of Sorcerers. During the Thanedd coup he had attempted to maintain both reason and neutrality. He certainly offered proof of the former when it turned out that those conspiring with Nilfgaard thought nothing of his impartiality - teleporting back to Kovir was an extremely reasonable, and life-saving, course of action.
If Geralt chooses to rescue Triss during Chapter III:

After hearing the accusations against Síle, Carduin demonstrated keen intuition and political savvy. He immediately demanded that she be removed from the Conclave, thus proclaiming the newly formed institution's stance on the matter.

If Geralt chooses not to rescue Triss during Chapter III:

Their protests were for naught – Carduin and the other mages were arrested in connection with the accusations against the Lodge of Sorceresses.

Carduin can appear once more depending on dialogue choices during Imperial Audience. If Geralt tells General Morvran that he had to save Triss, then you can meet him in Oxenfurt near Radovid's ship HMS Oxenfurt-Tretogor.

Carduin of Kovir was once a wealthy and influential member of the Council of Sorcerers, a man known and respected by all the rulers of the North. After the Council imploded during the coup on Thanedd Isle, Carduin spared no expense in his quest to rebuild his brotherhood's hard-won position.
This motivated him to take part in the eventful summit in Loc Muinne, during which a handful of mages seeking to reactivate the Council were forced to accept King Radovid's patronage. After that Carduin found himself on the king's leash, completely dependent on the whims and moods of a mad ruler whom he served not out of respect but fear. The mage's pride, however, forced him to don a brave face and play out the hand fate had dealt him. 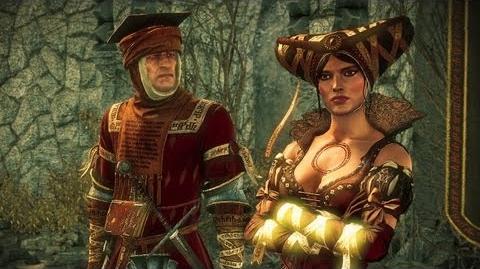 A Summit of Mages (with Triss) (The Witcher 2) Full HD