The most powerful of all the necrophages, the Cemetaur is the true queen of the necropolis. A Graved Dead spells certain death to anyone but a witcher. This is a well-known fact among grave robbers and all who live near battlefields.

Cemetaurs are rare, they are found on battlefields and cemeteries just like other necrophages

They are immune to common poisons, resistant to knockdown and stun attempts

Cemetaurs try to knock down their victims and eat them alive. This provides an ideal opportunity to use the Black Blood potion

"Much has been written about ghouls and graveirs, since they are encountered by common people in times of war or in cemeteries. Cemetaurs are female graveirs, rare and stronger than it's graveir husbands, but when they appear in a necropolis, they take it over. All ghouls respect them and must bow to them." 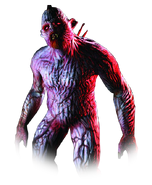