Witcher Wiki
Register
Don't have an account?
Sign In
Advertisement
in: Redanians, Elves, Characters in the comics,
and 4 more
English

The Last Wish
Something Ends, Something Begins

The Witcher
Chireadan was an elf from the Redanian city of Rinde, a tavern owner, and Errdil's cousin.

Despite elves typically not finding humans to be attractive, he was secretly in love with Yennefer, though he never revealed his feelings to the sorceress. However, he didn't let his feelings get in the way when he saw that Geralt was also infatuated with Yennefer and even pulled the others away when he saw the two having sex in his cousin's destroyed inn after fighting off a djinn.

In Chapter IV, at the Lakeside, Chireadan, an elf among Toruviel's ragtag group recognizes Geralt. It seems he knows the witcher from somewhere before, but of course Geralt has no memory of him. This previous encounter, which is not described in any further detail, is a reference to the The Last Wish.

He is also a sharper, and thus one of the available dice players. He can be found any time, day or night to play. During the day, he is typically sitting at one of the two campfires nearest the Elven Cave. At night, he will be sleeping in the cave, but does not complain at all about being woken up just for a game. 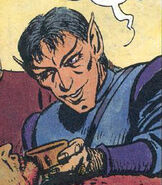