Ciaran aep Easnillen was a member of Iorveth's unit who had been captured by Loredo's men, imprisoned on the Prison barge at Flotsam pier and tortured. His fate seemed sealed and there was no way to save him or free him unfortunately.

When they heard that a member of the Scoia'tael had been captured, Geralt and Triss decided to pay him a visit to find more information about Iorveth and the Kingslayer. Ciaran was badly wounded and Geralt must've used the Axii sign to calm him.

Letho, the kingslaying witcher, tried to use him by convincing him to take command of Iorveth's unit with Letho's help. Loyal to his commander, he refused so Letho betrayed them and a fight ensued, Ciaran ended up getting captured and arrested.

He accepts his fate to be tormented to death by Loredo's soldiers, but begs Geralt to go warn Iorveth.

Ciaran had served in Iorveth's unit as the elven commander's adjutant. Captured and imprisoned on the prison barge by Loredo's men, his position was unenviable to say the least. Yet he still demonstrated the pride and stubbornness so characteristic of the Aen Seidhe. 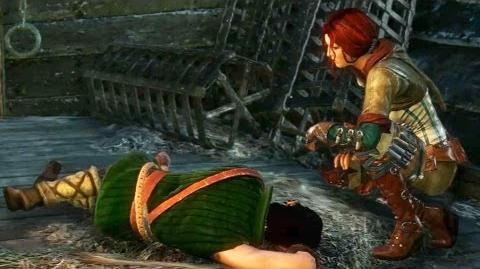